Since the function of my blog is to demystify what the life of a professional musician is like, it seems appropriate to detail what I do when preparing a recital program.

The recital in question will be on June 3rd at the International Double Reed Society Conference in Tempe, Arizona.

It may seem too early to start on a program now for a June date, however, I must take several things into consideration when planning:
I anticipate blogging frequently on this subject.  I hope you will enjoy following me as I go through the process of preparing my program.
Posted by Barry Stees at 7:02 AM No comments:

The movie was shot entirely in Cleveland in 1967, just after the Hough race riots. It deals with school desegregation, busing and a cellist in the Cleveland Orchestra! 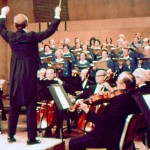 The cellist's best friend is a bassoonist who subs with the Orchestra.  The bassoonist gets the best lines in the movie as the comic foil and reality check for the idealistic cellist.

There is a couple minute scene of reedmaking accurately portrayed! The cellist arrives at his friend's house and finds him upstairs in the bathroom.  The bathtub is filled with water and soaking tube cane.  The bassoonist takes the tubes downstairs and splits, gouges, profiles (by hand!), shapes and forms a reed.  He ties the reed, cuts and trims it and tries it rejecting it.  Very true to life! 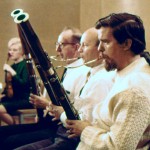 In another scene, the bassoonist is playing 3rd bassoon in the REAL Cleveland Orchestra rehearsing with the real Cleveland Orchestra Chorus in Severance Hall. They rehearse a Bach Cantata. The conductor, Michael Charry (then an assistant conductor), rehearses the basses, celli and bassoons alone.  He isn't satisfied because the bass line is too loud.  They try it again, and you can hear Goslee and Laksar playing a little too loudly to push the scene to its end when the conductor tells the bassoons to try the passage with just two and says to the third bassoonist, "Streggor, thanks you can go!"  He walks offstage dejected and joins the card game going on in the musicians' lounge. You can see Goslee looking over as Don Streggor goes offstage as if to say, "Sorry!".

Streggor has a girlfriend in the chorus who meets a violent end in the movie across the street in the grass near the Wade Lagoon. He jokes with her onstage by sticking a bassoon reed in his ear which she can see from her vantage point in the chorus.

We see Severance Hall, Wade Oval, Euclid Avenue, MLK and the Cultural Gardens, and lots of other places in Cleveland.  Shots of the men's locker room and backstage, too.

The movie is quirky, though. The cellist lives in a beautiful arts and crafts house that was probably well beyond the reach of most of the Orchestra at the time.  Most of them had second jobs to pay the bills back then.  He drives a British sports car, a Morgan -- also a luxury for the musicians then.

He argues with his wife, a ceramist and photographer, about busing their son to Cleveland for school.  They live in Cleveland Heights.  This issue is handled very awkwardly in the movie to say the least.

It was rarely shown after its release and just last month restored in a digital format.  A DVD is forthcoming.

This ranks as one of the few movies that features an actor playing a bassoonist with speaking and playing roles.  The other two I know of are "Never Cry Wolf" and "Dona Flor and Her Two Husbands".
Posted by Barry Stees at 4:19 PM No comments:

The Birth of a Piece 2 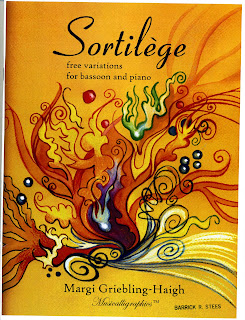 Margi got a copy of "Sortilège" with this beautiful frontispiece to me today. I'm very excited to start working on it!

I'd like to talk a bit about how I came to choose Margi for this commission.

First, I've premiered her trio, "Trocadillos" for oboe, bassoon and piano and her wind quintet and heard several of her other works, so I'm very familiar with her compositions.  Margi has a vibrant, expressive style that is traditional and very easy to grasp at first listening.

Third, I wanted the piece to have multiple performances after the premiere. It's such a shame for a new piece of music to be shelved right after a premiere and suffer an uncertain performing future. "Sortilège" be part of the required repertoire for the next Meg Quigley Vivaldi Competition. Each time it is held, the Competition features a new work for bassoon by a female composer. Thus, Margi fits this criterion, too.

Each applicant will learn "Sortilège", perhaps perform it in her area and then, if chosen for the final round of the competition, play it there. This will guarantee many performances of the piece in the coming year.
Posted by Barry Stees at 5:50 PM No comments:

The Birth of a Piece

The commissioning of new music for the bassoon has been one of the most rewarding aspects of my career.
There are many exciting parts to this process:
I have gone through this process many times. The last project resulted in my CD, "Nostalgica", which contains four pieces I commissioned. 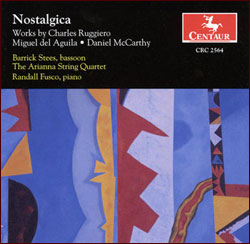 The result was extremely gratifying: music that pushed the boundaries of classical music, joining it with jazz and blues. It stretched my abilities and pushed my playing to a new level.

Just last week I received the first draft of a new piece I've commissioned from Margaret Griebling-Haigh.  Margi is a composer, oboist and professional music copyist and editor.

The piece, "Sortilège", is for bassoon and piano. The purpose for the commission is two-fold. I will premiere the work at the 2011 International Double Reed Society Conference this June in Tempe, Arizona. The piece will also be required repertoire for the next Meg Quigley Vivaldi Competition.
Posted by Barry Stees at 8:12 AM No comments:

This afternoon I gave a master class at the Manhattan School of Music. Four bassoonists in the Orchestral Studies Program played; Kathryn Brooks, Daryn Zubke, Sasha Pavlov and Alex Posada. 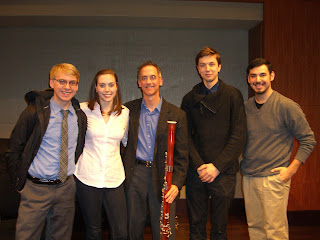 All four played well. The master class fit into a pattern I've observed at many of the ones I've given over the years. Student brings in a few excerpts or etude or piece with most of the basics covered -- technique, intonation, good sound all in place-- but with little or no interpretation or compulsion in the playing.

This is not a knock on what I heard at MSM, but a general trend I've observed in giving these classes.

The tight job market and the presence of peers and a guest teacher seem to induce a desire to please and play it safe. Often you can literally hear the voices of the many teachers who've offered comments to these students in the playing.  The voices drown out the student's voice at times! At some point the student needs to absorb what the teachers have said, but synthesize the comments with what he or she has to say on the bassoon.

Certainly there are some excerpts that leave no room for personality, e.g., Beethoven 4th, but Shostakovich 9th or Sheherazade should be seen as challenges to dig deep inside one's self, mine the emotions, life experience and study of recordings and performances to come up with something genuine and personal. The young artist must absorb the traditions of the past, but must also craft interpretations from some sort of inner drive that must be let out in the playing.

I think of the story of Wagner's Die Meistersinger, in which Walther comes on like a bull in a china shop with his singing, is initially rebuffed, but through some mentoring with Hans Sachs, composes his Preislied and wins over the Meistersingers. Check out that opera. A really great examination of how artistry is built.

Another interesting examination of this process is found in the movie, The Black Swan. In it a ballerina is challenged to move out of her comfort zone to inhabit the roles of the White and the Black Swan. The White Swan comes easily for her because it fits her artistic temperament ("I just want to be perfect!"). The Black Swan is a stretch for her, but, in learning the role, she finds a side of herself that she didn't know was there.

Posted by Barry Stees at 8:06 AM No comments:

I spent the morning going on an espresso bar pilgrimage.  After finding my favorite Midtown place, Zibetto, closed for renovation, I ventured downtown by train to Cafe Grumpy in Chelsea and Gimme Coffee in SoHo.

At Grumpy's I had their Guatemalan coffee made in the Clover.  It was heavenly!  The Clover gives a full flavor and a very clean taste.

At Gimme Coffee, I had the espresso.  The barista took a lot of care with my order, tossing at least two shots that he didn't feel up to standards.  He was tasting the shots all along and adjusting the grind.  The one he gave me was a little strong and bitter for my taste, though.

I made it to our morning rehearsal with time to spare.  I tried reeds on the Carnegie stage.  This is one of the most flattering halls in the world.  You can hear others AND yourself clearly.

In the rehearsal, Franz adjusted balances and colors in "Faune" and "Heldenleben"
and the orchestra responded with some magical textures.  The Orchestra has played here for years.  We know what to expect, so our adjustments were enhanced by the hall's legendary acoustics. 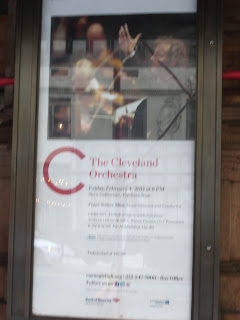 I'm really looking forward to our concert tonight.
Posted by Barry Stees at 7:33 AM No comments:

Unexpected things can happen on tours and this one is no exception.

We flew from Miami right into the center of a nasty winter storm, arriving in Ann Arbor on Tuesday.  We played our concert in Hill Auditorium to a surprisingly large audience, given the severity of the weather.

During the concert, we learned that our concert the next evening in Chicago was canceled.  I was disappointed because of the many relatives I had who planned to attend, but it was definitely the right decision, under the circumstances.

This gave us a free day in Ann Arbor.  I spent it thusly; in the morning I went to a local coffee roaster, Mighty Good Coffee, and tried the espresso -- really great!

Lunch was Zingerman's deli-- one of the best around!  I went for an afternoon run in the snow and wind with Zach Lewis. There was some practicing in there somewhere. 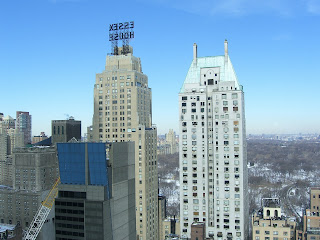 Yesterday we got into New York.  I went for a quick run in Central Park and practiced for an hour. 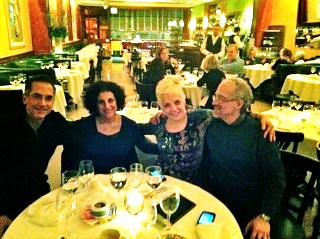 I had a great dinner with Judy LeClair and Kim Laskowski of the New York Philharmonic bassoon section, along with Jonathan Sherwin and Rich King.
Posted by Barry Stees at 7:25 AM No comments: