Recently, a reader of this blog asked a few questions about my profile. Here are my answers and some further thoughts.

The reader asked what the measurements are that I use to set up a profiler, with specific requests for the thickness of the fold and the collar. I apologize in advance for the use of the English measurement system. The United States educational system tried to convert all of us to the metric system in the 1970's, but some stubbornness remains!

1. General thickness. I leave an average of about .03" of thickness on the profile at all points compared to a finished reed. It has been my experience that totally finishing a reed during the profile results in weaker and fewer usable reeds.

2. How to set the thickness. The thickness of the cut should be set so that the profile is thinnest (compared to measurements for a finished reed) at the intersection of the two tapers of the reed blade slope. Some call this the bump, some call it the beginning of the heart of the reed. See below where taper 1 meets taper 2.

My reed has two major tapers (I omit a small one at the very tip for simplicity's sake.) -- one that runs from the collar to about the 3/4 of the blade's length and another, sharper taper the starts there and finishes at the tip. Most German scrape reeds are similar.

Because I use a single-barrel profiler, I get only one slope for the entire length of the blade in my profile. Thus, as you can see in the diagram above, for a thin, but usable profile, it is necessary to balance the profile by bringing it as close in thickness to that of the point at which the two reed blade tapers meet.

This means that there will be some extraneous thickness at the ends (tip and collar). You can change the angle of the slope of the profile to favor a thinner collar or tip, but you must always be sure not to set the profile so that it is too thin at the crucial point in the diagram.

* Here is a clever way to avoid ruining the blade and scraping the cane barrel when adjusting the profiler thickness. Before profiling, with no cane on the cane barrel, put a shim -- made out of a piece of paper -- on the barrel , bring the blade down and pull the shim out from under the blade. If there is friction, you've probably set the profile too thin.

My profile thickness at this point is between .001-.002" greater than finished reed thickness.

To measure the profile thickness, I use my nearly endless supply of bad cane. After profiling, I remove the cane and cut it (without folding)in the two places where the two tips would be. Then I measure the thickness using a dial indicator. Measure the cane with the gouged side up for greater accuracy!

Ideally, to get a very thin tip profile, while maintaining proper thickness at the crucial point where the tapers meet, would result in an extremely thin fold, or the cutting through of the blade at the center point. That's why my profiled tip is rather heavy.

Ways around this:
The latter is what K. David Van Hoesen did in his modification of the Pfeifer double barrel profiler. The same could be done with any single barrel profiler ramp. Simply level or reverse the downward slope for the last 1/4" of the cut. The result would be a nicely thin tip, but enough cane left on the fold so that it wouldn't fray or break apart when folding.

Profilers with a double taper ramp:

1. The MD Reed Products profiler has a double taper. MD will also make a profiler with my custom ramp dimensions.

2.  Ramp upgrade. The PCD Company makes replacement ramps that fit the Rieger, Pfeifer and Popkin profilers. These ramps are machined with the double taper. I'm not sure about how the Rieger replacement fits on, but to add the Pfeifer or Popkin, you just unscrew the current ramp and screw the new on in place.

* In my test, the replacement ramp required almost no shimming to adjust the profile thickness, but if you try this, I would use the shim test described above to be sure the new ramp doesn't result in a profile that is too thin. 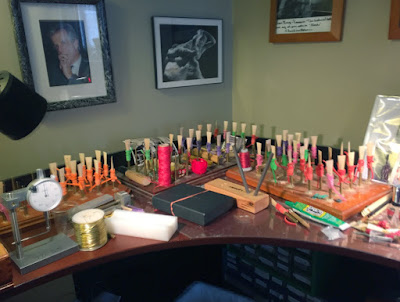 My reed desk is starting to fill up with blanks. I get a lot of questions about how to get good reeds from your reed making.

Assuming proper tools and good workmanship, when dealing with cane we are ultimately faced with the predestination of botany.

It is indeed humbling to admit that, after decades of research and effort, I still make some reeds that will never be usable. I've spent a lot of time in this blog and on my website and in countless lessons with students sharing my wisdom about reed making.

However, I have to admit (as we all should) that often your efforts are defeated by poor cane quality. Even with the methods I use for cane selection, there are still factors in the cane that elude my eye.

So, when someone asks me how I ensure that I always have a few presentable reeds in my box, I give the following advice:

1. Never rely upon one source of cane for good reeds.
2. Keep a stock cane from at least three different sources at all times.
3. Always have blanks available from several different cane sources.
4. Leave them on your drying rack for at least two weeks -- longer will yield more good reeds.
5. Fill your reed case with reeds from these different sources.
6. Rotate your reeds for day-to-day use.
Posted by Barry Stees at 7:32 AM 1 comment:

Today is Radu Lupu's 70th birthday. We have performed with him on numerous occasions. Among the memorable performances were a traversal of all 5 Beethoven Piano Concerti in Carnegie Hall several years ago.

This fall we performed the 4th Piano Concerto with him twice on tour -- once in Milan and once in Munich. While the Beethoven performance in Munich was especially memorable, it was his encore there that left us all in awe. His performance of the Brahms Eb Intermezzo made us forget that we were a tired group of touring musicians and reminded us of the power of music to inspire and soothe!

Here is Kirill Gerstein's tribute to Lupu. At the end is a video of his encore after performing with us in La Scala. Yours truly is barely visible at the beginning of the clip during the applause.

Posted by Barry Stees at 5:59 AM No comments: