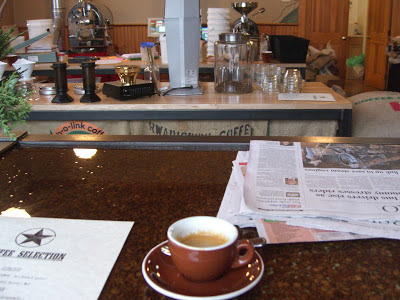 I found a terrific coffee bar yesterday!  It's called Rising Star.  Located in the Ohio City neighborhood of Cleveland, it occupies a former firehouse on the corner of West 29th Street and Church Street just south of Detroit Avenue.

While primarily a small batch roaster that supplies to local restaurants and individual customers, it has a storefront and bar in the firehouse building.  I visited the storefront yesterday and spent some time talking with the owner and employees.

These guys are devoted to finding the best quality sources for coffee, and using the best methods for roasting, grinding and extracting the brew.  Most roasters use coffee brokers to purchase their lots, but Rising Star goes directly to growers (the owner had just gotten back from Peru when we spoke yesterday) to sample the coffee in person. They also rely on samples sent from growers.

They buy only micro-lots of coffee.  All the employees I spoke with sample LOTS of coffees on a routine basis to keep current with what's out there.

They deliver or ship their coffee within one day of roasting to guarantee freshness. You can also pick up orders in the store.

The coffee is roasted in the firehouse behind the bar area. 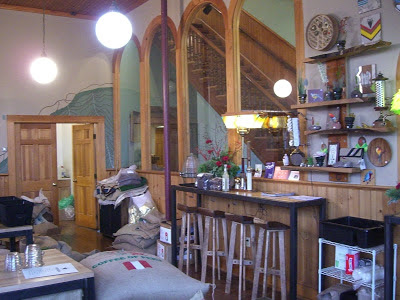 You can watch the roasting while you drink. 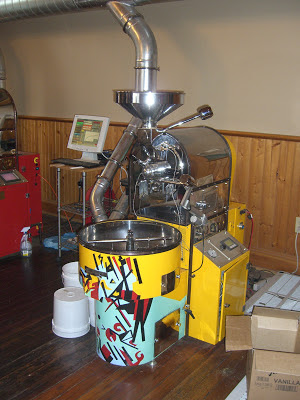 The employees are very open about the business and really enjoyed talking about coffee with me.  They have a very unpretentious attitude about their craft and offered me some tips on how to improve my home roasting and my espresso making.

Although the store's offerings change regularly, yesterday they had two espressos available -- one single origin from Bali and another that was a blend.  There were three different coffees available brewed -- one from Peru, the Balinese and one from Guatemala.

There were also specialty iced coffees and sweets available for purchase.

Perhaps most interesting was that they offer three different ways of brewing the coffee :

Each order of coffee is made individually.  No one is in a hurry to process your order.  Shots are pulled carefully and with attention. No beans decaying in Lucite bins, no giant carafes with brewed coffee mouldering in them, no coffee blackening on burners.

The coffee has not been roasted off-site at some indeterminate date.

I tried the Balinese espresso.  It was one of the best shots I've ever had.  A lighter roast with a great mixture of tartness and sweetness.  This was followed by an aeropress Peruvian and then they offered me a pour over Colombian that was extraordinary.

The storefront is very basic with just a few stools and a table for eating and drinking, so if you go, don't expect a lounge atmosphere with Wifi and outlets for laptops, a fireplace, groovy music, etc. This is a workplace that just happens to have a coffee bar that serves the best coffee I've had in Cleveland! 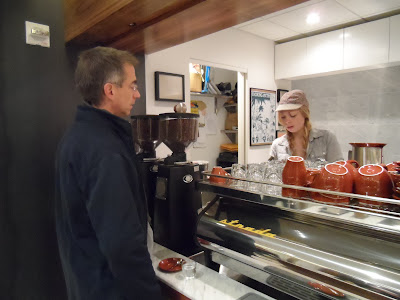 The Blue Bottle Coffee company has come to New York.  This may not be news to New Yorkers, but to me it's exciting news.

Blue Bottle is named for the first coffee house in Europe, started shortly after the Turks left their coffee beans on the outskirts of Vienna in the 17th century, setting off a caffeinated revolution in the West.

Blue Bottle is a Bay area roaster that serves coffee that has been roasted no longer than 48 hours prior to serving.  Anyone who has had a cup of coffee brewed from beans that are that fresh knows that the kind of flavor derived from such freshness CAN'T be achieved at your local Starbucks or any other shop where the beans are stored in grinders or (worse yet) those plastic bins without attention to the roasting date.

Because of the gas exchange due to roasting, coffee has a shelf life.  As a home roaster, I know that coffee from the same batch tastes very different depending upon how long ago you roasted it.  Employees in most coffee shops can't or won't tell you how recently the coffee in your cup has been roasted.

Vacuum packing and other storage methods can prolong freshness, but in the end it's best to roast just enough for use within 48 hours or so. This is perhaps why many home roasting machines have a small capacity.

Thus, Blue Bottle and others that keep track of this stand out.  Care in grinding and extracting the coffee is also essential, of course.

Blue Bottle uses a pour over method for their drip grind.  Coffee for each cup is ground and brewed individually.  Nearly boiling water is used to wet the paper filter and warm the ceramic filter underneath, then slowly poured into the filter while it sits on a rack just above the cup.  Ideally the water is poured at the same rate at which the coffee is being extracted below.  This process takes several minutes. 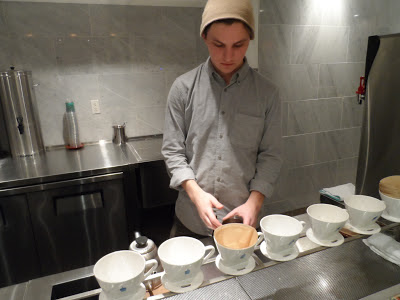 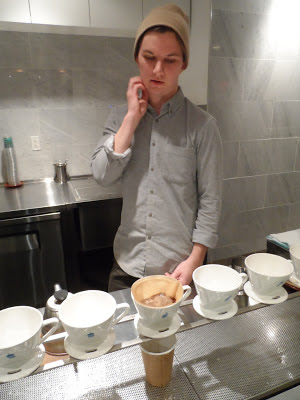 The baristas in the basement of the Rockefeller Center are well trained and excited about coffee.  I caught one at a low period of business and he offered me a couple of samples of their different coffees.

For me, the real test of a good coffee bar is its espresso.  No milk to hid bitter or under roasted coffee!  At the Blue Bottle shop, much care was taken.  The shot was weighed on a scale (not unusual in the business).  More unusual was that the barista threw out a couple of shots after trying.  I think my shot came from the third attempt. This would be considered wasteful most places!

He extracted a very complex Yergacheffe for me.  A single origin, organic coffee from Ethiopia.  Getting good espresso from a single bean is a real treasure.  Usually espresso is a carefully mixed blend of four or five very different coffees combined to give the shot complexity, warmth and good crema. This shot tasted so good I didn't want to add sugar.  I've only ever done this with my brother's espresso before. 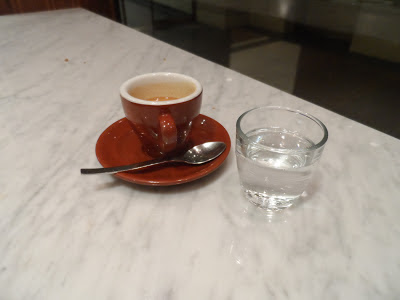 In another nod to Vienna, the espresso is served with a small glass of water.  In this case, sparkling water.

The baristas at the shop were passionate about coffee but not snobbish.  They had no problem making a sweet milk coffee drink for the next lady in line.

Besides the location Rockefeller Center, there are shops in Chelsea and Tribeca.  The coffee is roasted in nearby Williamsburg.  That is how they guarantee freshness.

The Marathon That Wasn't

As many of you know, I have been training and raising money to run in the New York City Marathon this year.  You may also know the Marathon was canceled due to the devastation caused by Sandy.

I thought I'd write a bit about my personal experience in New York this weekend.

Yes, we did fly to New York on Friday, expecting the race to be on.  Every day, several times a day, the mayor, the New York Road Runners officials and Team Boomer (my charity team) through emails or the media told all of us that the race WOULD take place.

This situation obtained until Friday evening when Mayor Bloomberg canceled the race.  We found out while still on the plane at LaGuardia from the woman in front of us when she turned on her phone upon landing.

The mayor made the right call.  I just wish he'd made it earlier in the week.  Thousands of people traveled like us with the expectation that things were normal enough in New York for this event to take place.

However, when the race officials and volunteers were seen loading generators and tents for the runners on Staten Island (the starting point of the race) while rescue workers were still pulling BODIES out of houses nearby it became clear that holding the race was a bad idea.

This may have been the turning point in the decision to cancel the race.  Even thought the race was donating a large sum of money and aid to the relief effort, it just seemed wrong to a lot of people that this thing should go on.

Twitter and Facebook (one of the times I am glad I don't use either of these) were loaded with venomous, even violent threats against the runners.

I was able to contact my friend, bassoonist Louie Nolemi and his wife Joanne and hear that they were OK and helping out flooded out neighbors there.

Without much hesitation, my family and I decided to go ahead and spend the weekend in NYC.  For me this was never solely about the race.  I'd raised over $5000 for the Boomer Esiason Foundation and we had planned a family get together in New York for that weekend.  The race was just one of the events we had scheduled.

My older daughter, Grace, was to celebrate her 21st birthday with us there along with her boyfriend.  Unfortunately, her airline DID cancel her flight and the friends who were going to put the two of them up for the weekend had vacated their home in Larchmont, NY because they had no power!

We also had big plans to spend some time there with my brother in law and his family.  His daughter, Allie is the one who has Cystic Fibrosis. John was also registered to run the race.

The hotel check-in was interesting because we hit the lobby just after the cancellation announcement.  The check-in line was long, packed with runners wanting to change their reservations or just leave to go home.  We saw a large group of runners from Chile and felt bad that they, along with thousands of others had made the long journey to the USA only to have their plans thwarted by the disaster.

Later that weekend we had a long talk with a couple from Englewood, NJ who were staying in the hotel because they had been displaced from their high rise condominium.  Eight months ago they had moved from their house in Staten Island to NJ -- a good decision in retrospect, but there they were with their dog in the hotel for an unspecified amount of time.

I wonder how many Manhattan hotels are now housing people displaced by the storm?  Was I taking a room away from a family that needed it?  We also noticed many Red Cross personnel in the hotel.

However, there were very few signs of the storms in our part of Manhattan (around Grand Central Station). Everything was open except Central Park (which opened on Saturday) and a couple of blocks around Carnegie Hall where a large crane had bent back on itself in the wind. You may have seen this on the news.

The Cleveland Orchestra is booked in Carnegie Hall for a concert on the 13th.  I wonder if we'll be going?  The streets surrounding the hall and the hotel the Orchestra will be staying in were closed off.

We spent our weekend visiting some of the famous places near our hotel.  My nieces had never been in NYC, so it was fun to watch them experience things like ice skating on the Rockefeller Center rink, going to Times Square, etc.

I understand that many runners went out to Staten Island to volunteer.  Others ran the course themselves on Sunday, there was even an unofficial marathon in Central Park, complete with water bottles and bananas for the finishers and cheering crowds.

You've got to understand that a runner spends a couple of weeks before the race recharging the batteries, tapering off the mileage and resting up for the race itself.  You become antsy, like a loaded gun mentally and physically during that period.  It feels good to let it out when the race happens.

When the race doesn't happen, it's important to find a release.  I waited until I got back home and went on a 14-mile trail run. It was colder than NYC (35 F), but the run felt good.