In the second movement, The Story of the Kalendar Prince, Rimsky-Korsakov wrote two extended  bassoon solos.

The first solo comes at the beginning of the movement, right after the violin cadenza with harp accompaniment.

In order to form an interpretation of this solo which capitalizes on its expressive possibilities in such a way that the listener can fully appreciate them, an understanding of the solo's orchestral context is essential. 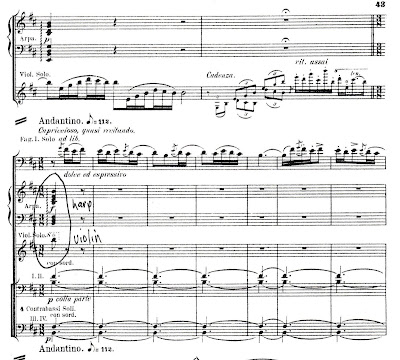 There are two things to note from the score about the beginning of the bassoon solo:
These last notes from the other instruments can draw attention away from your first sounds. Especially in a live acoustic, it may take a second for the bassoon sound to emerge -- sometime after the first few notes of the solo. Indeed, often the bassoon's first notes are lost in live and recorded performances.

Therefore, it's helpful and expressively important to start with a full, resonant tone -- including the G grace note. I believe the phrase should relax in intensity to the B in bar three, so starting with a full sound also gives you a better chance for an expressive shape to the opening bars. In this solo, "Up is Up and Down is Down"* is a good maxim. 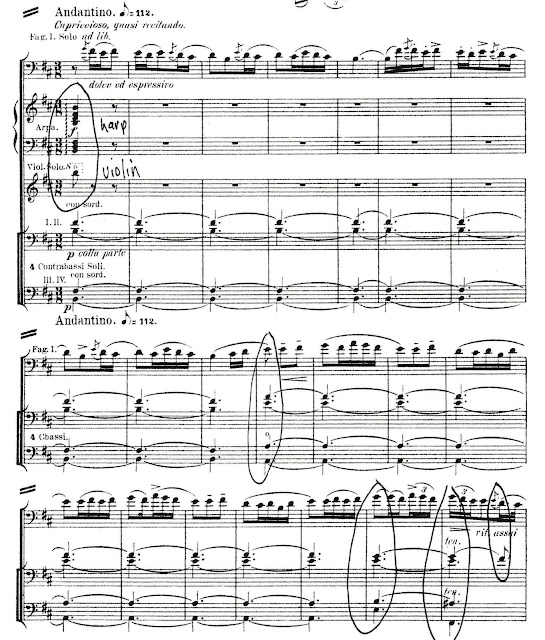 After the beginning, projecting a solo sound is easy, given the light accompaniment of the four-part bass line. It is gratifying to play a solo like this which gives you opportunities to show the beauty of the bassoon's intimate nature along with its noble full-throated side.

By following the bass parts above, you can see that the harmonic motion is static for several bars. Notice where the chord changes occur (circled). By broadening at these points, you can enhance the new harmony underneath and allow the music to breathe. Breathe literally, too, as these chord changes happen near traditional breathing points for the bassoonist.

In order to bring out the seamless quality of this musical story telling, I strive to make my breathing as unobtrusive as possible. The phrases are like a chapters you weave together into a story in order to keep the constant attention of the listener.

Thus, when you do breathe, try to leave the last note before the breath with a rounded, resonant tone, breathe quickly and re-enter at the same intensity at which you left the sound. It helps to broaden a bit just before breathing. This buys you time for the breath without adding the perception that you've added beats to the measure.

Knowledge of the context becomes most important when finishing this solo. There is a lot going on in the last few bars. By two bars before A I've reached the most expressive, fullest sound in the solo. In the next bar I begin the process of handing the solo off to the oboe.

The harmonic motion speeds up, adding tension to the end of the passage. Rimsky-Korsakov adds a ritard assai at the very end. Playing with a broad sense of time and an intense sound allows the final events to unfold gracefully.


The conductor re-enters the picture at this point to assist in the hand off. The ritard assai, along with serving an expressive function, gives the conductor and everyone who enters at A a chance to get ready to play.

You will see two beats from the conductor during this little note! One beat when you first play it to help the uppermost bass line move with you, and another to help you move from it to the C# and to give a pick up to those that enter at A.

Because the next section is in strict time and no longer flexible, the last two notes of the solo must be played in the NEW tempo: ♪=112. The need for the conductor and other musicians to start predictably
takes away any freedom you have here. In effect, the ritard assai only applies up to the famous D dotted 16th note.

Played as an Excerpt

In order to play this passage convincingly as an excerpt (in an audition, for instance), the performer must play with a sense that there is an imaginary conductor and orchestra in accompaniment. Younger, less experienced players who show their understanding of the context of this solo when performing it can ease the minds of those listening who may otherwise question their slim resumes and lack of experience.

In my next post, I'll examine the context of the three bassoon cadenzas that follow later in the movement.

* An expression used by oboist, John Mack to indicate phrasing in which a higher pitch is more intense than a lower one.

Last week we opened the 2106 Blossom Festival with performances of Rimsky-Korsakov's Scheherazade.

I'll discuss my interpretation of the solos and how I dealt with other difficult passages in this piece in my next post.

For now, I'd like to recommend you listen to a superlative recording of the piece. Fritz Reiner leads the Chicago Symphony Orchestra in what has been described as one of the best orchestral recording made of ANY orchestral piece.

Posted by Barry Stees at 8:46 AM No comments: