Off Label in the Plumbing Department


There are some really cheap products here that will make your bassoon tune better, fit together better and work more quietly. 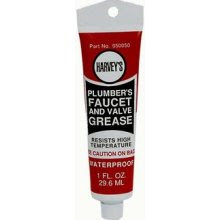 Plumber's grease can be had for as little as $1.00 per tube!  It is a terrific, non-corrosive lubricant for quieting and lubricating posts and rods on the key mechanism. You can also use it on rollers and long screws, although most repair technicians prefer a key oil in those places. 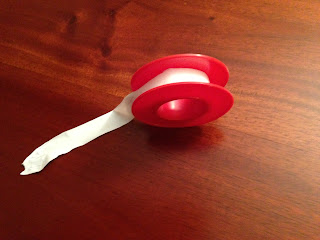 Plumber's tape (also called thread tape or teflon tape) also costs about $1.00.  It's really great for wrapping loose tenons.  I find it a much better material than thread because thread compresses cork when wrapped over it, making it necessary to wrap even more thread on top of it.  Better than waxed dental floss, too, for the same reason.  Teflon tape stretches so it has "grab" like plastic wrap.  You can use it on tenons and bocal corks.  It can also be wrapped around the seams of a reed to stop leaking and wrapped on a bocal tip to plug a leak in the butt of the reed. 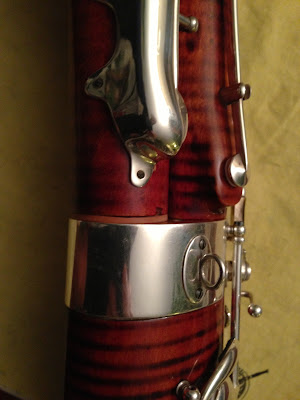 If you look closely at the juncture between my long joint (left top) and boot, you will see a small pinkish section between the metal of the boot ferrule and the wood of the small end of the long joint. This is a slip joint washer.

This washer has the same diameter as the long joint tenon and fits snugly on it.  Why put a washer here?  2 reasons.
Nearly every bassoon I've come into contact with has been improved through using one of these!

These washers cost about 25 cents each!  I love finding cheap solutions to big problems! You may want to take your bassoon in for a fitting, however, because there are different shapes and sizes.  Be sure to buy rubber ones that fits snugly on the long joint tenon.  Also, avoid ones that are contoured.  Go for the ones that are flat on each face.

To avoid having to buy an assortment pack, try to find an old-fashioned hardware store with loose ones in drawers. The washers also come in black and grey.  If you don't like the color, you can blacken it with a marker.

Here are some more photos so you can see how things look. 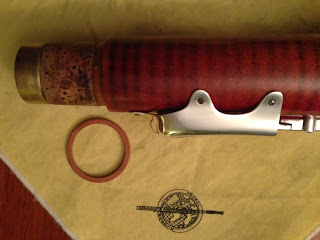 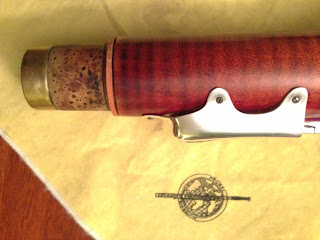 
In the pharmaceutical field, the term "off-label" applies to uses for a drug other than that for which it was originally tested and marketed.

Accompany a bassoon player into a hardware store or craft store and you will see how this applies to our field. We spend a lot of time in these stores looking at products and wondering how they can be used to make reeds, etc.

The bassoonist views the sandpaper in the automotive or paint section of the hardware store as a wonderful abrasive for finishing reeds. The rubber slipjoint washer in the plumbing section doesn't belong under the sink, it is for the long joint extension from the boot socket, you dummy! I once brought my long joint in to the plumbing section to find the washer that fit best and boy you should have seen the looks I got from the plumbing guy!

This is the first in a series of posts about cheap, off-label uses for ordinary tools as applied to the bassoon and reed making. Feel free to contribute your own ideas and uses! 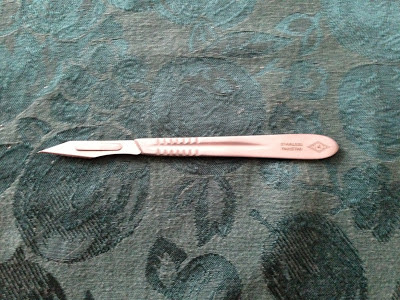 My first example comes from the medical field.  It's a scalpel.  This tool is GREAT for shaping and scoring.  Because of the high standards demanded by surgeons, the blade is of much higher quality than your average razor blade, X-acto or other type.

Using proper technique, I can shape up to 50 pieces of cane with just one blade before it gets too dull to use. Strip off as much cane as you can before actually contacting the shaper body with the knife. When shaping, as long as you keep the blade nearly flush to the slope of the shaper the blade will keep its edge for a long time.

The handle is available from McMaster-Carr:

Unfortunately McMaster doesn't sell the blade that's best for shaping.  This comes from Cincinnati Surgical.
Order the Swann Morton blade, 100/box, Size 25A. The non-sterile blades are a bit cheaper -- $31.00 for 100.

Cincinnati Surgical also sells a larger handle than the one from McMaster-Carr. This may fit your hand better. Scroll down to the bottom of the page to see the handle.  It's the last one on the page. Product: 07SM6B. The handle is $20, so not particularly cheap.

Remember, these are scalpel blades!  Take care when using.  The blade may be shaped differently from what you're used to.  It has a very sharp point (I know, I've poked myself with it several times getting used to it!). 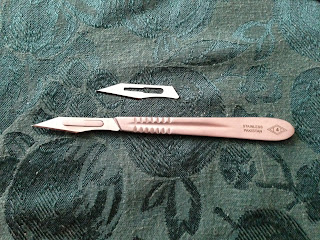 The blades are also available from Cincinnati Surgical.  Order the #25A.

When removing the blade use a pliers.  Bend the blunt back end of the blade up with the pliers, twist the blade slightly and slide it off the handle.

Touring With the Beethoven Violin Concerto


We made a tour last month. It included stops in Bloomington, Indiana (where we had a residency at Indiana University), Naples and Sarasota, Florida and a residency in Miami.

Among the several pieces we performed was the Beethoven Violin Concerto. Our soloist was Joshua Bell.  I thoroughly enjoyed playing the piece with him.  We performed it eight times during the tour.  Each time he  offered a performance of refined beauty.  He performed his own cadenzas, making small changes to the ones in the third movement each night.

There have been some interesting developments in Joshua Bell's career recently.  He is now the leader of the Academy of St. Martin-In-The Fields. In an interview he describes his role as part-conductor, part-concertmaster.  He sits in the concertmaster's position, playing and conducting.

This role should be natural for him because, as a soloist, he's not shy about giving suggestions and demonstrating when he wants a change in interpretation. Bell also moves and gestures a lot when he plays, so showing what he wants physically should be easy for him when he's conducting and playing.

Small digression: I remember performing this piece with Joseph Silverstein when I was with the Hartford Symphony. He also adopted the double role as conductor and soloist.  However, he moved very little when playing, so it was not easy for us to play together.  He would cue the woodwinds by raising one eyebrow, the rest of his body not moving at all.  Fortunately, Silverstein has big bushy eyebrows!

Back to Bell:  He has just made his first recording with his new orchestra -- Beethoven's Symphonies #4 and #7.

The other career development is the premiere of a documentary about his violin, The Return of the Violin.  Bell plays on a 1713 Stradivarius, the "Huberman", named for a previous owner, Bronislaw Huberman.  I encourage you to seek out this movie, because the violin has a gripping and fascinating history.

This is a term I use to describe a situation in which an orchestral musician is put in a very tight musical space by a conductor.  It occurs during a difficult passage that's made even more difficult by the conductor and/or by the player. It applies to a piece which is performed several times over a long period.

Among the beauties of the first bassoon part to the Beethoven Violin Concerto is this short passage at the end of the first movement.  After the violin cadenza, the strings enter with pizzicato as the violin softly plays the second theme of the movement. The bassoon enters softly, intoning the theme that first introduced the solo entrance of the violin at the beginning of the movement:

Although the solos are marked "pp", the bassoon is the main voice.  Since Beethoven never wrote different dynamics for each part in the score and, instead, just wrote one general dynamic for all voices at any part in a score, it's up to the player or conductor to balance the part.  Thus, understanding your role in the score is important.

In this situation it's clear:  you have the solo.  So, I like to play this out just a bit so there's a leading presence to the line.

Our conductor, Franz Welser-Möst, however, likes this passage to be played as soft as possible.  I knew this from playing this with him in the past, but wanted to see if this time, he'd let me play it out a bit.

As I started in on the first one I saw the palm of his hand go out towards me (sometimes known as the Heisman -- after the trophy).  Too loud!!

And here is when I made a big mistake!  I let my frustration get the best of me.  When I came in again after the bar rest, I played this solo in a sub-tone -- ridiculously soft.  And I absolutely nailed it, managing the difficult D - F# slur well, keeping all the notes smooth, soft and in tune with a good legato.

His reaction?  A big thumbs up and a smile!  Now I was stuck!  For all eight performances if I even hinted at playing it a bit louder his hand was at the ready.  I would have to play this solo at "ppp" every time.

I hear other players around me handle this situation effectively quite often and should have known better.
In order to get through the solos each night at "ppp" I had to be sure I was as relaxed as possible before entering.  I checked the reed tip opening to make sure it was right and that there was no water in the reed before starting. I was careful to focus on breath support and good embouchure when starting the D and making a good slur up to the F#.  My fundamentals had to be just right!

All the same, I was left wondering every night during the cadenza whether or not my reed was going to work when the solos came at that extreme dynamic.