I've just posted some performances of music I really like to play on YouTube.  These are pieces that are really great, but aren't played by bassoonists that much.

I post them in an effort to share my enthusiasm with you and encourage those of you out there who like them to learn them and play them.


2. Three Etudes for Bassoon and Piano by Jose Siquiera

Posted by Barry Stees at 6:50 PM No comments:

I've been thinking about the 2nd bassoon audition we held last month.  It was interesting to compare and contrast it to the one we held in January.  Many of you have read my post about that audition.

In this post, I'd like to offer some follow-up comments. In particular, I'd like to focus on the perspective I gained by comparing notes with the non-bassoonists on our audition committee.

Remember that it's usual for an audition committee to comprised of a majority of people who DON'T play your instrument.  Their perspective is somewhat different from that of a specialist and they potentially hold a majority in a vote.

For a candidate, then, it's vital to seek out opinions from non-bassoonists in preparation for an audition and try to weed out bassoon-specific problems from your playing.

Here are some of the recurring themes about some bad bassoon playing habits observed by my colleagues.

1. My colleagues wonder why the bassoon mechanism is so noisy!  Marriage of Figaro sometimes sounded like it had its own castanet accompaniment. Air leaking from the embouchure was also distracting.

2. Some candidates, including several in the semi-final round seemed incapable of playing a sustained musical line.  Lots of phrases in the Mozart Concerto were broken up by choppy articulation and accented downbeats.

3. Related to the above was a preponderance of clipped phrase endings, especially in the Concerto.  All phrase endings the first movement exposition are quarter notes.  So many people chopped them off, paying no attention to the finish and resonance needed for a graceful phrase ending.  I think this was partly due to nerves and the fact that most of the offenders were already thinking about the next phrase, forgetting to finish what they started.  Remember, have to paddle with one hand and bail with the other!

4. Double tonguing that sounds like machine gun fire.  My colleagues don't understand why this is necessary!  In the Marriage of Figaro, certainly Mozart's intention was simply to double the cello line in the bassoon parts, not to create a special effect.  Once double tonguing is learned, it needs to be musical, not a parlor trick.  In Figaro, the sound of the articulation should be like the fast bowing on the string you hear from the cellos.

5. Same vibrato for each excerpt.  Many players neglected to examine how they were using vibrato to add to the character of each excerpt and instead opted to use an unvarying default vibrato on everything.  Why would you use vibrato for the Tannhäuser Overture at all!  You are playing with clarinets and horns exclusively (non-vibrato instruments except in just a few parts of the world).  Furthermore, the Bolero solo requires a different kind of vibrato from a tutti passage in Brahms' Third Symphony.


6. Inability to change styles for each excerpt as needed.  Many of the candidates displayed no discernable change in style whether it was Mozart, Ravel, Tchaikovsky, etc.  Flexibility and versatility are essential skills needed in orchestra rehearsals where a conductor may ask a player to execute a musical 180˚
turn on his/her interpretation of a piece a few seconds after playing it for the first time.

7. Related to the above -- inability to resist the "pull" of middle-of-the-road playing, e.g., Figaro all played at "mp", Tannhäuser played "mp" at an Andante tempo with accented articulation.  These excerpts are easy to play when you ignore the dynamics and tempos indicated!

Again, these were comments I gathered from colleagues, some of them things a bassoonist might gloss over (key noise, rough double tonguing, etc.).  I think they are invaluable observations, ones to add to the list of priorities for the next audition you take.
Posted by Barry Stees at 8:50 AM No comments:

The Musical Back Burner 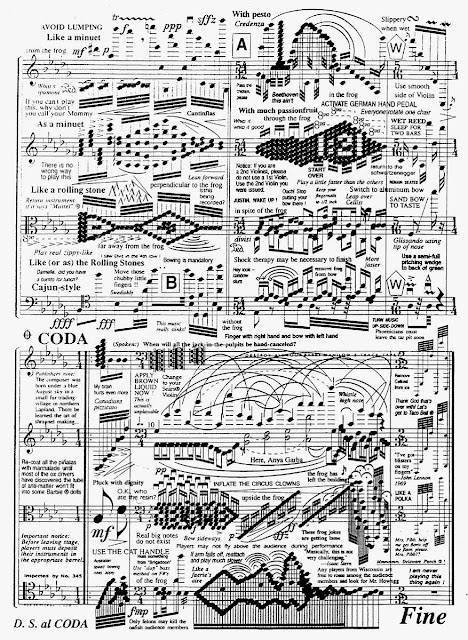 Pieces To Keep On The Musical Back Burner

The repertoire for this month's Cleveland Orchestra concerts contains a few pieces with some devilishly difficult technical passages. While the pieces I'm thinking of don't make it to the "Top 25" list of frequently asked audition material, I'd venture to say that most of us would need plenty of lead time to learn them for performance.

The first piece is Daphnis and Chloe, Suite #2. The Final Dance or Bacchanal contains some nearly unplayable passages for the principal bassoon. 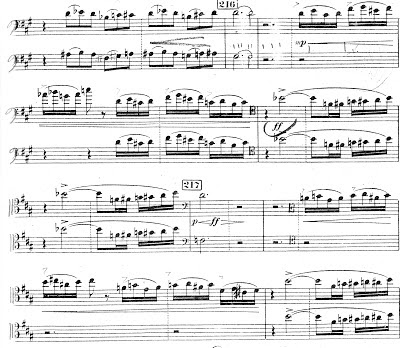 By using some harmonic fingerings the passage becomes easier to negotiate, but given the breakneck tempo usual in performance, it's still almost unplayable.  Certainly not something you could work up in a week's time never having played it before.

Likewise with this passage from the Russian Dance from the 1947 version of Stravinsky's Petrushka, which we're performing this week.

When taken at ♩=116, this is really challenging, too.  In fact, in the original 1911 version of the piece Stravinsky broke this part up, writing it for two bassoons alternating the triplet/eighth figure -- one plays one beat while the other rests -- to create a continuous line. He knew this was hard!

Petrushka gets involved in a lot of violent acts during his short ballet.  He's kicked by the Charlatan, he hurls himself into and breaks through a portrait of the Charlatan on canvas, and gets beat up by the Moor who finally slays him with a sabre.

It occurred to me this week that Petrushka the puppet reminds me a lot of another, more contemporary character.

By the way, the Daphnis passage cited above can be simplified by giving the second bassoonist the second group of 16ths to play in each 16th passage.

Not wishing to encounter nasty surprises like these passages, I've compiled an informal list of passages that need regular technical maintenance work so that they can be ready when needed.  Warm and serve. . .

These are passages that I'll try to work on during one or two practice sessions each month when I have time.