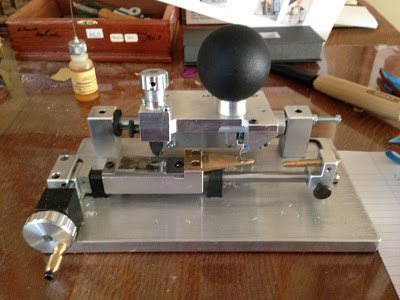 I have a new reed making machine. It's called the "Ultimate Reed Finishing Machine". It works the same way a tip profiler does, only it processes the whole blade of the reed from collar to tip.

My machine is made by the German company, Rimpl, although there are other firms that make a similar machine. I purchased it from Miller Marketing. The machine I ordered came with a template and tongue custom designed to my specifications.  I sent them three finished reeds to use in copying my scrape to the template and fitting the tongue to my reed shape and contour.

With customizing the price is about $200 more than that listed on Miller's website ($1799).  This makes this machine very expensive.  However, a Rieger tip profiler is about the same cost and it only processes the tip of the reed.

In a previous post I registered a strong opinion about expensive profilers. However, I'm very convinced that this machine is worth the extra money.  I'll explain why in a minute, but first watch this demo I made. (Warning, I have no future as a videographer!  Keep the volume control handy.  Some of the clips are recorded at a lower level than others.)

Here is a demo I made using the machine:

Advice on using the machine:

Before making this purchase a friend lent me his machine to try.  I also asked around to find out how satisfied others were with it.

Here was the feed back I received:
Why I like this machine:

This machine gives me a reed that measures within .002-.003" of a finished reed at EVERY point along the blade. It accurately describes the sophisticated tip scrape necessary for a good reed and mimics the taper of a finished reed from collar to tip and from side to center to side.

I leave the cut a bit thick as mentioned above to allow for breaking in and adjusting for slight differences in hardness and response from reed to reed.

I like the fact that this machine is made to profile a blank with tip cut off and not a gouged piece of cane that's waiting to be processed for the drying rack.  I have explained my preference for starting with a simple profile that's even in thickness across the cane. I like to be able to choose how much collapse I want in the tip from sides to center, not having that programmed in before the drying stage.  I count on the forming and drying process to program in a certain shape to the inside of the blank.

Winterizing Your Bassoon and Reeds

We're having a pretty serious winter here in Northeast Ohio now. It's been hard to run outside in the snow and ice, but I'm trying to get out so I can train for the Miami Half Marathon on January 29th.  I've run this race almost every time we've been in Miami in January now.

Along with physical training, I've been attending to the changes brought on my bassoon and reeds by the extreme dryness that comes from the indoor heating season.  Low humidity robs reeds and bassoons of their moisture and resonance.

Reeds need more time to soak in the winter.  I try to use warm water for soaking. The reed absorbs warm water faster.  Cold water tends to close the tip I've noticed.

To help them vibrate better I often scrape my reeds just a bit thinner in the winter than I normally would.

Many bassoonists take steps to humidify their reed cases.  Here's what I do:

In the winter I use a humidified reed case: 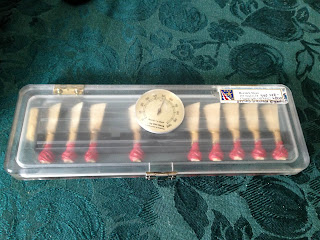 Dampening the sponge puts just enough moisture into the case. 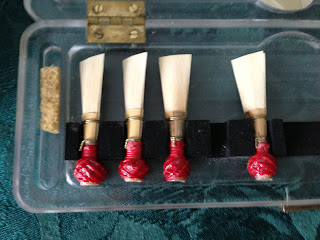 The gage isn't particularly accurate, but gives you a rough idea of how dry the reeds are.  I try to keep the humidity at between 50-79%.  You don't need a fancy case like this, however.  If you want a less expensive solution, putting your reed case in a freezer bag with a small hole cut in it and adding a few orange peels works well. The hole keeps mold from building up.

For the case I use a tobacco humidifier. 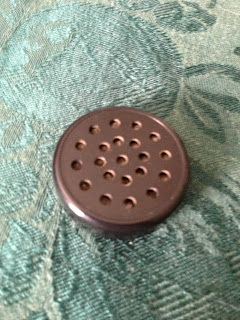 I don't recommend a string Dampit.  Repair technicians have told me they have found mold in cases sometimes when those are used, particularly if the Dampit is put in the long joint.

Some people put orange peel in the case to humidify the bassoon.  This works well, but I'd be careful if you have an older bassoon that has some finish worn off in places or just a delicate layer left.  The peel is very acidic and could hasten the decaying of the finish. A former colleague of mine has a 50-year old Heckel that has much of the finish either missing or coming off.  He has taken good care of the instrument in general, but has used orange peel in the case for years.  A coincidence?

Keeping the instrument at a constant temperature is sometimes difficult during the winter.  Try to store it at night away from direct heat but not in cold, drafty areas of your house. Having an insulated case cover is helpful as is wrapping it in a warm blanket for long car trips.

Wood and metal on the bassoon expand and contract at different rates.  Exposure to extremes of heat and cold can cause keys to bind or gain excess play.  Cracking can also be a problem if the bassoon is not swabbed properly and then exposed to cold.

I remember a Thanksgiving break during my time at Michigan State in which the power went out all over campus for much of that weekend.  Not much was hurt by it, but the keys on the school's contra bassoon (which was kept in the reed room during the break) bound up badly.  The combination of the drop in temperature during the power outage and the rise in temperature when the heat was cranked back up over that weekend made the posts move closer together binding most of the keys on the instrument!

Help from Those in the Desert and Mountains?

Bassoonists that live the dry climates found at high altitude and the desert use techniques to humidify their reeds and bassoons as a routine.

Getting Back in Shape - A Plan for the New Year

It was nice to take a break from bassoon playing over the holidays, but now it's time to get back in shape.  I believe it's really good to take several days off from playing from time to time to recharge your batteries and get some rest.

However, the Cleveland Orchestra revs back into action this Tuesday and I've been working to get myself back into shape again.

The first day back on the instrument is always great.  It's fun to rip around on the bassoon and play just for fun. I enjoy reconnecting with why I like to play.

However, the next day's practice is usually deflating.  I sound terrible -- poor support, sluggish technique, bad reeds, etc.  How could I have let myself get this out of shape?!

So I've been getting back to long tones and scales in an effort to build my support and embouchure and get my fingers working well.  I also find it necessary to fit in some sight reading because my eyes have lost a little of their quickness with keeping up with the music as it flows along.

In addition, I've made a long-term plan for my practicing this winter.  I'm going to learn all of the 12 Etudes by Bertoni.  I hope to learn a new one every two weeks. I'll also brush up on pieces and excerpts that my CIM students are learning so I can help them better and demonstrate in lessons without embarrassing myself!

Currently I'm re-learning the Nussio "Variations on a Theme By Pergolesi".  I'll also study Waterhouse's transcription of the Bach Partita in A Minor for Flute and dig out the Mozart Concerto again.  There will be some other pieces to study as the CIM semester progresses.

I'm also practicing several pieces by Manuel de Falla that I've arranged for bassoon and piano and one for solo bassoon.  I'll perform these at a concert by my bassoon quartet, the Men Who Don't Bite on Feb. 17th in the afternoon at the Pilgrim Congregational Church in the Tremont neighborhood of Cleveland.  This concert is part of the Arts Renaissance Tremont concert series.

I've also been making a LOT of reeds.  I hate spending time on processing cane and making blanks during the work schedule, so I've tried to fill my drying rack with as many blanks as I can.  By December I had nearly cleared my drying rack of blanks.  After a few weeks' effort I now have 35 blanks drying on them and 20 reeds with tips cut awaiting finishing touches in a reed box.  I hope this will last me until the season ends at the end of May.
Posted by Barry Stees at 4:54 PM No comments: