The concert is over. My bassoon is silent now.  I swab and put it away for the night. Tomorrow I will continue my search for resonance.

Every night my sound disappears. I must search it out every time I put a reed on my bocal and begin to play.  Will I find the sound I’m looking for?

“Mastery of the bassoon is transitory and must be renewed daily.” – Norman Herzberg

The bassoon makes no sound on its own. It is my responsibility to coax the sound I imagine into life. 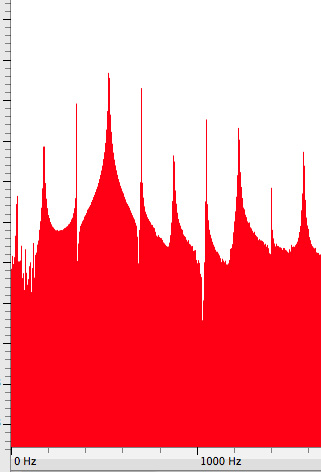 In this post, I'll show you some pictures of my sound!  These are called spectrographs.  They are a visual realization in the form of a graph of the different parts of an individual pitch.

Since I'll be showing you several spectrographs, a short introduction is in order.

The horizontal axis of the graph shows the number of Hertz (or cycles per second) for every part of the sound.

The vertical axis shows the relative amplitude of the sound throughout its spectrum as measured in decibels.  Roughly speaking, this axis shows the strengths and weaknesses in a given pitch.

Resonance peaks or harmonics in the sound are represented by the peaks of the red "mountain range" in the graph.

Why is knowing about the strength of the harmonics in an individual pitch important?
Having at least a passing understanding of this is important because the timbre, focus, projection of your sound is directly related to the strength or weakness of the harmonic series for each pitch you play.

In this post I'm going to show you what the sound spectrum of a pitch played on a good reed looks like versus that played on a bad reed, loud dynamic, soft dynamic, sharp pitch versus in tune, etc.  I'm sure you'll find this interesting.

A couple of disclaimers before I start.

1.  I don't know how easy the graphs will be to read.  I'll try to crop, enlarge, label for easier reading.

2. I'm wading into deep waters with this subject and feel a little out of my league.  If I'm throwing around terms that any of you know more about than I do, please comment and help correct/amend my arguments!

Words used by one person to describe sound may not mean the same thing to another.  While it is important to focus one’s thoughts when describing sound, I wondered if there was a way to present qualities in bassoon sound objectively.

The answer, as it turns out, is yes and no.

In 1962, Paul Lehman recorded bassoonists from orchestras in Detroit, Cleveland, Philadelphia, Boston and Berlin in an attempt to discover what physical qualities characterize bassoon sound.  (The Structure of the Tone of theBassoon, Paul Robert Lehman, University of Michigan, 1962). His study recorded individual notes covering the full range of the bassoon at soft, medium and loud dynamics for all 11 bassoonists. The charts in the study show the strength of each partial for each note recorded. The results make fascinating reading.

Below are some of the conclusions Lehman drew from the data in his study.

In the summer of 2009 I recorded some music at SoundEngineers studio in Bentleyville, OH.  After one of the sessions, the engineer, Bruce Gigax, spent a few minutes with me recording individual notes in isolation.
I started with a very resonant note on the bassoon, c (Using Helmholtz’ system the C one octave below middle C on the piano).

In these graphs, the high points are resonance peaks, corresponding with the frequency of each partial in the sound. Areas of solid color below the peaks can be described as “noise” in the sound that does not contribute directly to the recognition of the pitch in question. 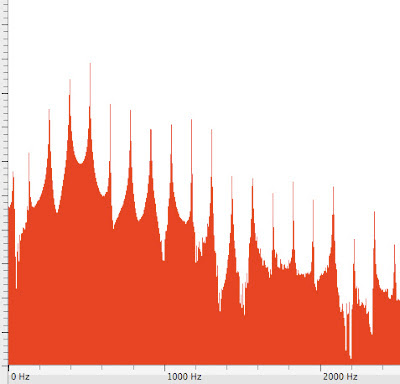 As noted by Lehman, the fundamental is relatively weak with the second and third partials progressively stronger, rising to the peak of the fourth partial in the range of the first formant.

Compare this spectrum with my next sample, the same c played on a bad reed. 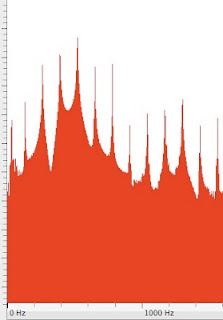 This was a very dull and unresponsive reed. In this spectrum, the resonance peaks are particularly weak above the formant, whereas in the first spectrum they remain strong well into the 3000Hz range.

Here is a graph of both spectra.  The good reed is graphed in green, the bad in purple 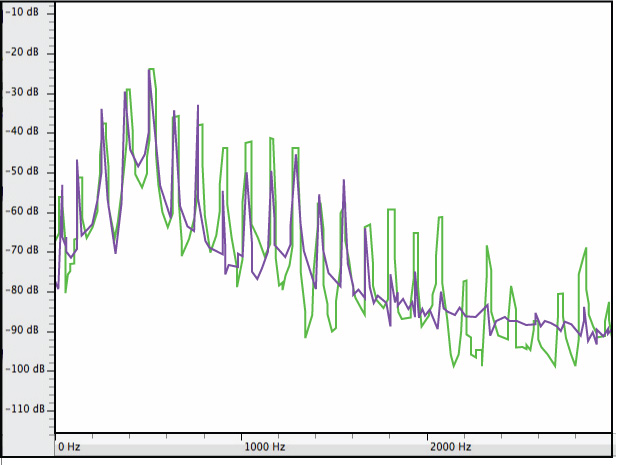 You can see that after the first few harmonics, the bad reed loses resonance quickly with the peaks much lower than the good reed.  The good reed also keeps a much wider variance in peaks and valleys throughout. Perhaps this accounts for its clarity and focus?

The next graph shows a “pp” c. 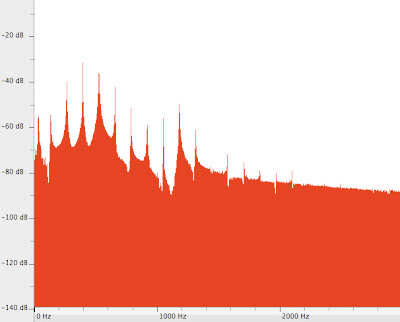 In the “pp” c, the resonance peaks and valleys are less stark than in the first c spectrum. This is especially true above the formant where the peaks appear as though they have been planed off.

Below I plotted the spectrum for the c played at three different dynamics -- "pp", "mf" and "ff" 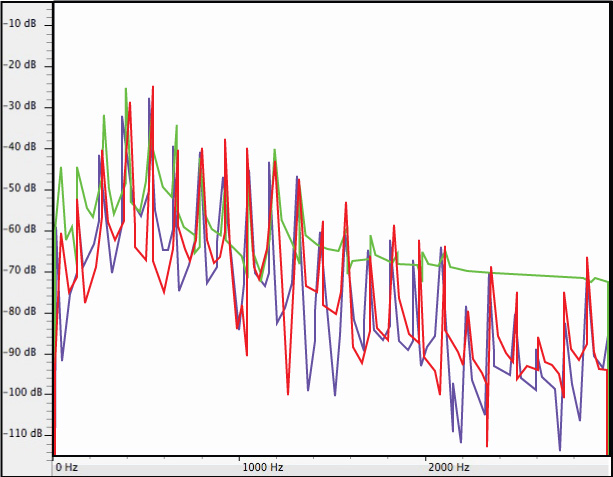 The big differences again come with the higher partials with the "pp" reed "flat lining" and the others maintaining more contrast in peaks and valleys.  Perhaps the fortissimo peaks a little higher in places than the mf.

Next I sampled the same note c, but played it very sharp by squeezing the reed. 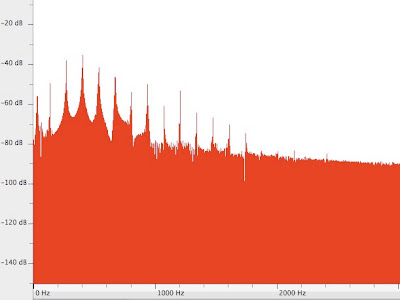 This spectrum looks very similar to the “pp” c, with a higher amount of “noise” in the sound and smaller resonance peaks, especially above the formant range.

Here's the sharp c compared with the regular c from the top of the blog. 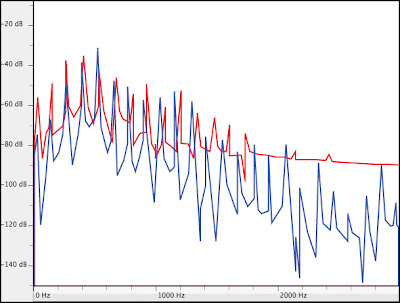 Following is the spectrum for c1 or middle C on the piano. 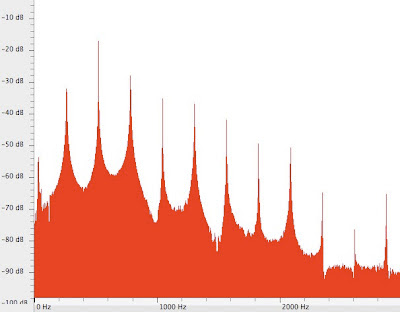 Compare this c1 to a vented c1, played by opening the high C vent on the wing joint while closing the three tone holes on this joint. 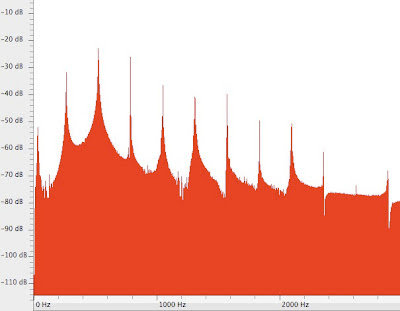 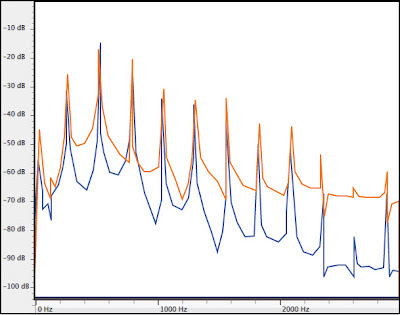 Moving on to other pitches, I chose a d-flat.  Known for its unfocused, stuffy and unstable quality, the resonance peaks are much more inconsistent in strength in this spectrum than in the “full” C. 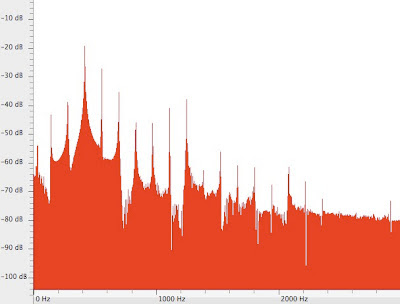 The spectrum for B (low B) shows resonance peaks with very even strengths (only a little stronger in the formant range than the fundamental).  There is quite a lot of noise in the sound on this note. It is interesting to note that the harmonics of this note are so confusing that tuners often register this note as an F#! 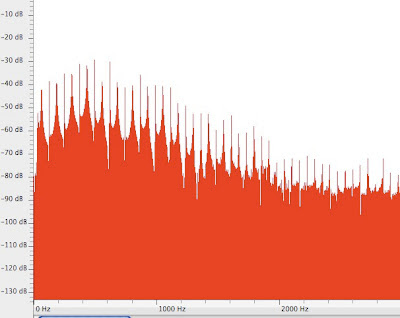 Last is open F.  The open note on any instrument is always difficult to match with the tone of other notes on the instrument and open F on the bassoon is no exception.  It tends to have a simple, blaring tone. 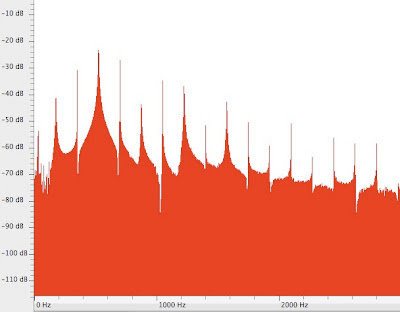 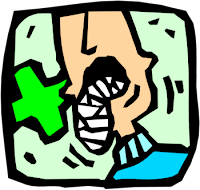 A few weeks ago we played an all-Mozart concert.  Comprised of The Overture to the Abduction from the Seraglio, the Clarinet Concerto and Symphonies #35 and #41, all pieces contained passages that required double tonguing.

After the concert I felt as though I had used up my quota of double tongues for the summer!

The ability to double tongue has become a necessity for the bassoonist.  According to Sol Schoenbach, it was a common practice in earlier days, but fell out of usage in the 20th century.  This seems odd to me because multiple tonguing has been part of brass playing consistently for centuries.

For some reason (perhaps because it's more difficult to learn for reed players than for brass) it wasn't standard practice on the bassoon until the past few decades.  I know when I was studying, no one impressed upon me its importance.  Former Cleveland Orchestra bassoonists, George Goslee and Ron Phillips never learned to double tongue.

You can listen to old recordings of Beethoven's 4th and hear the bassoonist using slurs in the articulated passages in the last movement (e.g., Toscanini/NBC Symphony).  Bassoonists of this time period simply put in slurs or modified the parts to make them workable.

However, if the tempo went a bit faster, I struggled.

In addition, I hated and still dislike the sound of my articulation when I double tongue. Very few people can double tongue with such finesse that you can't tell the difference between the two syllables used.

It took me 10 years before I felt comfortable using my double tongue in public.  If you haven't learned to double tongue, however, don't assume that it will take you this long!  Many others have learned this skill faster, so don't assume because it took me so long, that's just the way it is.  My stubbornness in committing to work on it and my fast single tongue speed made it take longer!

How to Double Tongue

There are many successful ways to learn to double tongue.  Here are some ways I teach it:

I think the best way to teach something is to impart the skill as simply as possible.  Playing the bassoon is hard enough without an overload of information. Analysis can lead to paralysis!

Some students will pick this up right away, so don't ruin it by over-explaining!

Most students, however, won't pick this up right away, so you need some more options.
Method 3

Some students can make a good "ticket" but can't repeat it many times.  Start with baby steps.
After learning to articulate in this manner clearly and consistently on the reed, add the bassoon.  The added resistance can cause difficulty.  If this is the case, do it with just reed and bocal for a while.

You may have noticed I teach double tonguing with a fast speed.  Some teach it first with a slow repetition.  This would be Method 4.  I feel that since double tonguing is used only for speedy passages it isn't absolutely essential to learn to do it slowly.  In fact, some students have trouble speeding it up after learning it slowly because they are so focused on feeling how their tongue is moving inside their mouth during the slow repetition. Believe me, no one thinks about this when they're double tonguing at a  fast tempo!  There's no time for that. This is an example of "analysis leads to paralysis"!

However, for those who don't pick up the skill using the above methods, it is helpful to slow things down.  The placement of the tongue and the airspeed during double tonguing are very different from normal bassoon articulation.  Sometimes it's helpful to focus on those changes.

With the reed --
Other Tips

When I double tongue if I think about it,
Applying the Technique to the Music

The brass players use pages from the Arban Method for applying double tonguing to actual music.  Getting this book and putting the passages in range is helpful.  Making up your own studies is good, too.  Practicing your scales by double tonguing is also helpful.

We can use the Milde 25 Studies in All Keys for the application of double tonguing.  These are lengthy, however, and are best utilized after you've got some endurance.

I don't find it profitable to practice double tonguing for more than 5 or 10 minutes in a practice session.  My tongue wears out and things just get worse from then on.  Let it go and pick it up the next day.

My double tongue skill withers quickly if I don't keep on it.  I've never felt like it's just "always there for me."

Make sure that you can double tongue slow enough to cover speeds just a little bit slower than your top single tongue speed so there's no "gap" in your ability to cover all articulation speeds.

There -- I've given you a lot information about double tonguing.  Maybe you won't need all of it!  Hopefully not.  I really do believe keeping it simple is the best way.  True for teaching in general, I think!

Let's hear from you!!