Knowing the harmonic underpinning of a line can lead to a convincing interpretation. In the case of Shostakovich you might not think that's so important.

Just playing through the bassoon part to the 4th and 5th movement of the 9th Symphony, you barely notice a particular harmonic base. In fact, a lot of it sounds atonal.

However, a close look at the score reveals a very traditional harmony for both passages in the 4th movement.

In the first passage, there is an F major chord held throughout in the strings.  The lack of cellos (just violas and basses) and a first-inversion spelling gives the chord a disembodied feeling, but the harmony is still very clear.

In the passage above I've used a "c" to denote all bassoon pitches that fit in the F major chord. All dissonant notes are circled.

Knowing whether or not a particular note is dissonant or not opens avenues for interpretation. The "d" half note 11 notes in is quite dissonant and long in duration.  It also makes up the first note of the half note motive outlined in my previous post.

Therefore, this should be a real point of tension in the line. I make a crescendo to the "d", give it a strong beginning and hold onto it a little longer than two beats.

Another obvious tension point is the high "Db" right after the quarter rest.  To bring this out I elongate the quarter rest (this allows the F major harmony in the strings to shine through for a brief moment), stretch and increase tension on the "F" just before the "Db" and lengthen the "Db".

Since there is no meter, varying the length of the rests in this passage can add to the dramatic effect. I like to minimize the last quarter rest (before the final "Eb"-"C") in order to show that the tension is not really gone until the consonant C is sounded at the very end. I don't agree with the practice of some who like to breathe during this rest -- it lets up on the tension before it's time to do so. Don't breathe, but hold out the "Db" before the rest longer than normal length, rest and come right in with the "Eb".

The second passage follows suit. A major, first inversion. Look for the dissonances and consonances in this one.  They are placed strategically throughout the line. I extend the final crescendo in order to stress the dissonance of the "Bb" towards the end.

The effect of playing this in the orchestra can be simulated by having three other bassoonists hold the chords while you play.  You can really hear the harmonies this way!  Trade parts and let everyone else have a turn with the solo.

Alternatively, have a pianist play the chords while you play the bassoon part.  The pianist will need to re-strike the chords several times during the playing to keep the sound of the harmony alive.

I'd like to thank Doug Spaniol, Bassoon Professor at Butler University, who introduced me to the harmonies of this movement during a master class he gave for my students at Michigan State University many years ago.
Posted by Barry Stees at 7:16 AM No comments:

In this post, I'll examine the motives employed in the first bassoon part for Shostakovich's 9th Symphony. An understanding of what motives are used and how they are deployed, developed, etc., lends greater clarity and authority to any interpretation.

As such, Shostakovich descends from a long line of composers best exemplified by Beethoven, who, upon settling on a particular motive were extremely skilled in capitalizing on the most salient features of the motive through repetition and development.

Let's go to the part to see what I'm talking about.

In the 4th movement I identify two particular motives. The first is the two half notes that comprise the first interval of the solo -- a perfect 4th. In the highlighted section below I show where this motive is developed over the course of the movement. 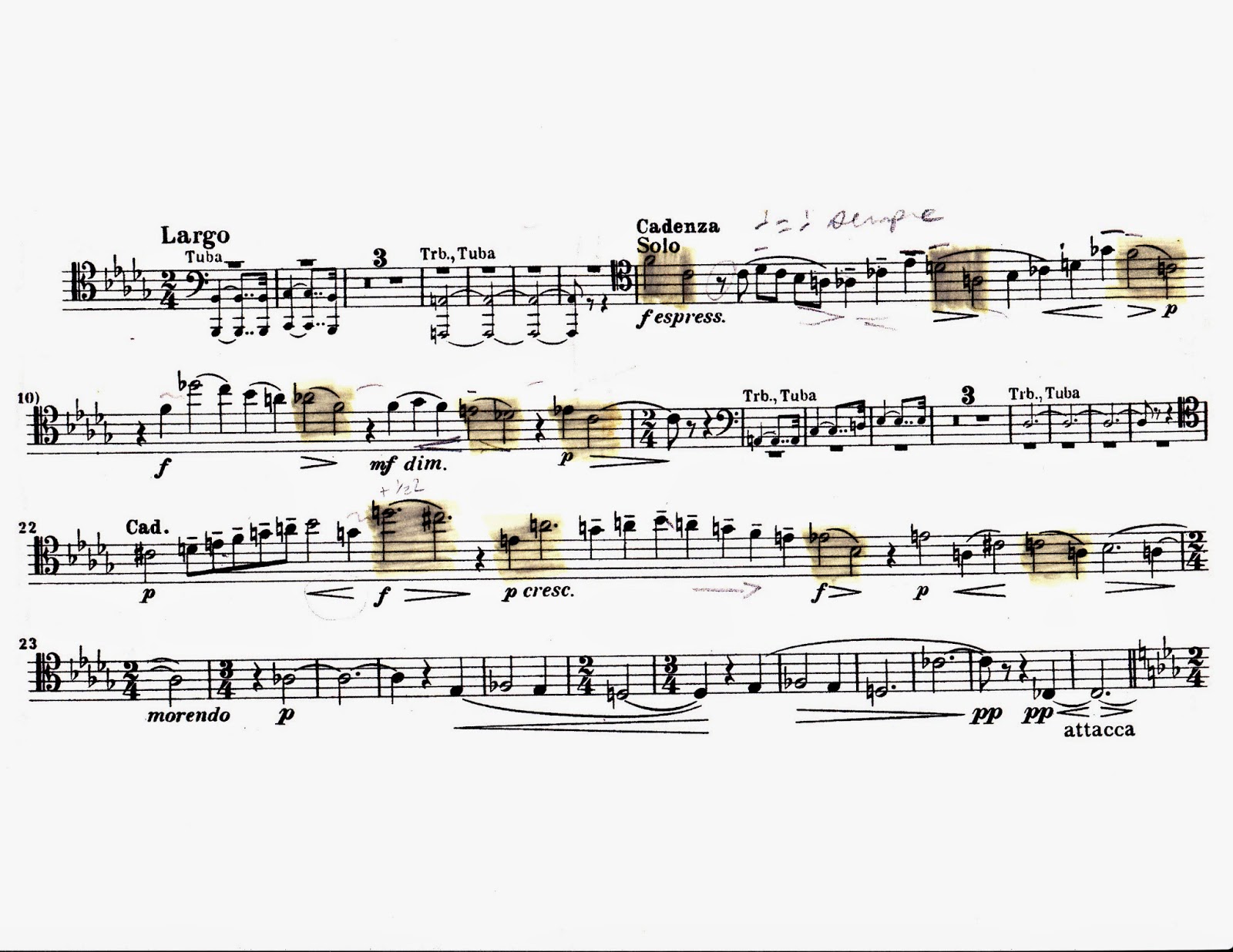 The perfect 4th half notes go through a transformation as the movement progresses, the interval decreasing to a minor third at the end of the first section. In the second section, Shostakovich takes more liberty with the interval and the rhythm, but the reference to the opening interval is clear throughout.

I play the perfect 4th in imitation of two big Russian church bells, with lots of sound at the beginning of each note and a slight decay towards the end. This is an appropriate reaction to the enormous brass fanfare that introduces the solo. As the movement progresses, I try to return to the "bell" style each time the motive comes back. However, as the interval decreases in size, I let the "bell" shape deteriorate into a softer figure.
Time should be taken to allow each two-note "bell" have an impact.

This motive comprises the "bones" or "skeleton" of the movement. Now on to the "flesh". 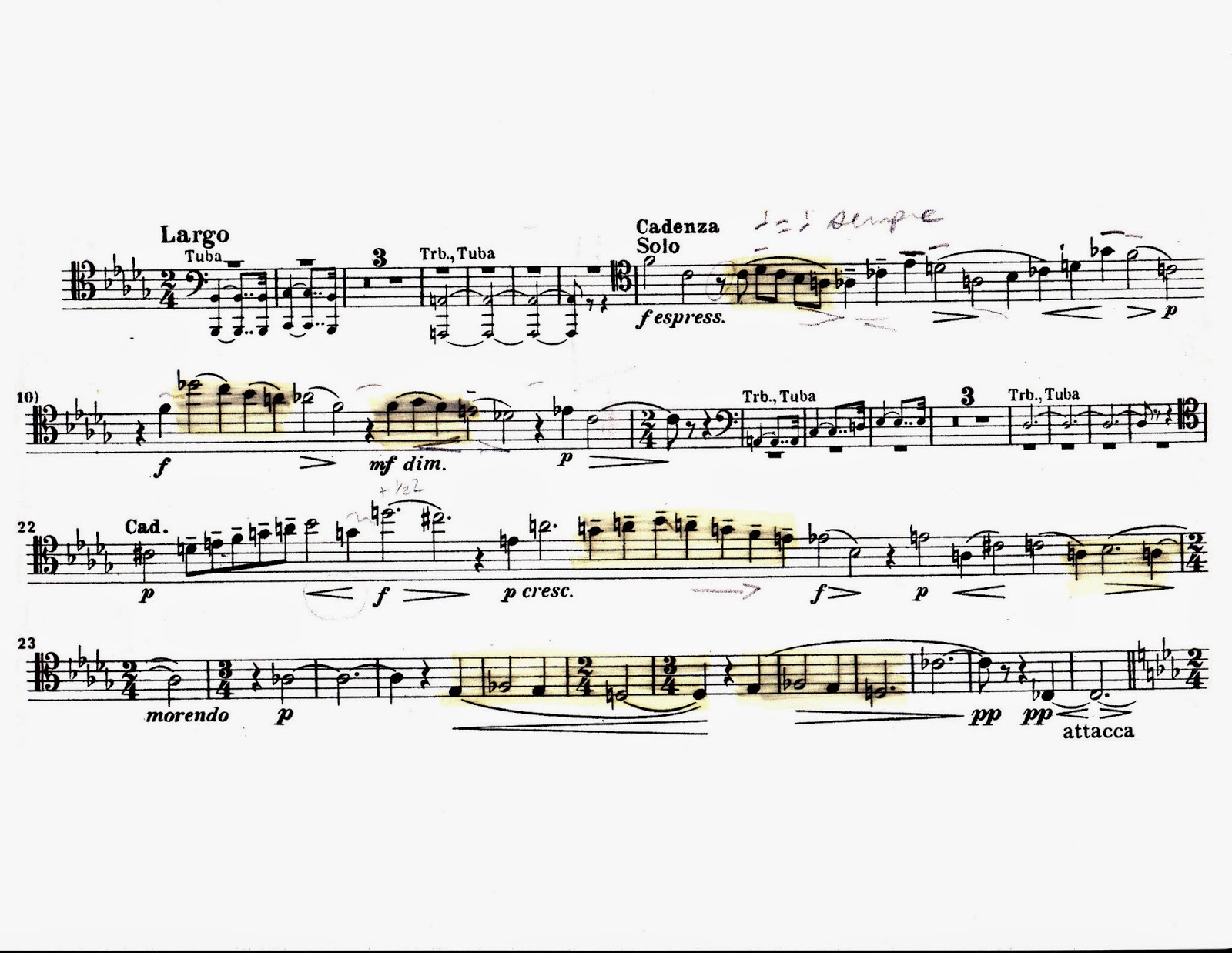 The highlighted portions in this excerpt show the connective tissue that binds the "bell" motives to each other. These motives are chromatic and step-wise in nature. Very different from the perfect 4th "bell"!

As such they represent a sort of reaction to the announcement of each "bell".

Each chromatic line needs to lead to the next two-note "bell". Generally I crescendo through to the end of each group to help introduce the "bell". Rubato helps keep the line interesting and helps to avoid a static feeling to the lines.

At the end the chromatic line degrades to a simple pair of minor 2nds without any "bell". Set in the middle register, this last line, following the primal scream of the high register lines above, is like a wounded animal writhing on the ground.

I identify two motives in the 5th movement. This movement is a March. The first figure imitates drum rudiments. 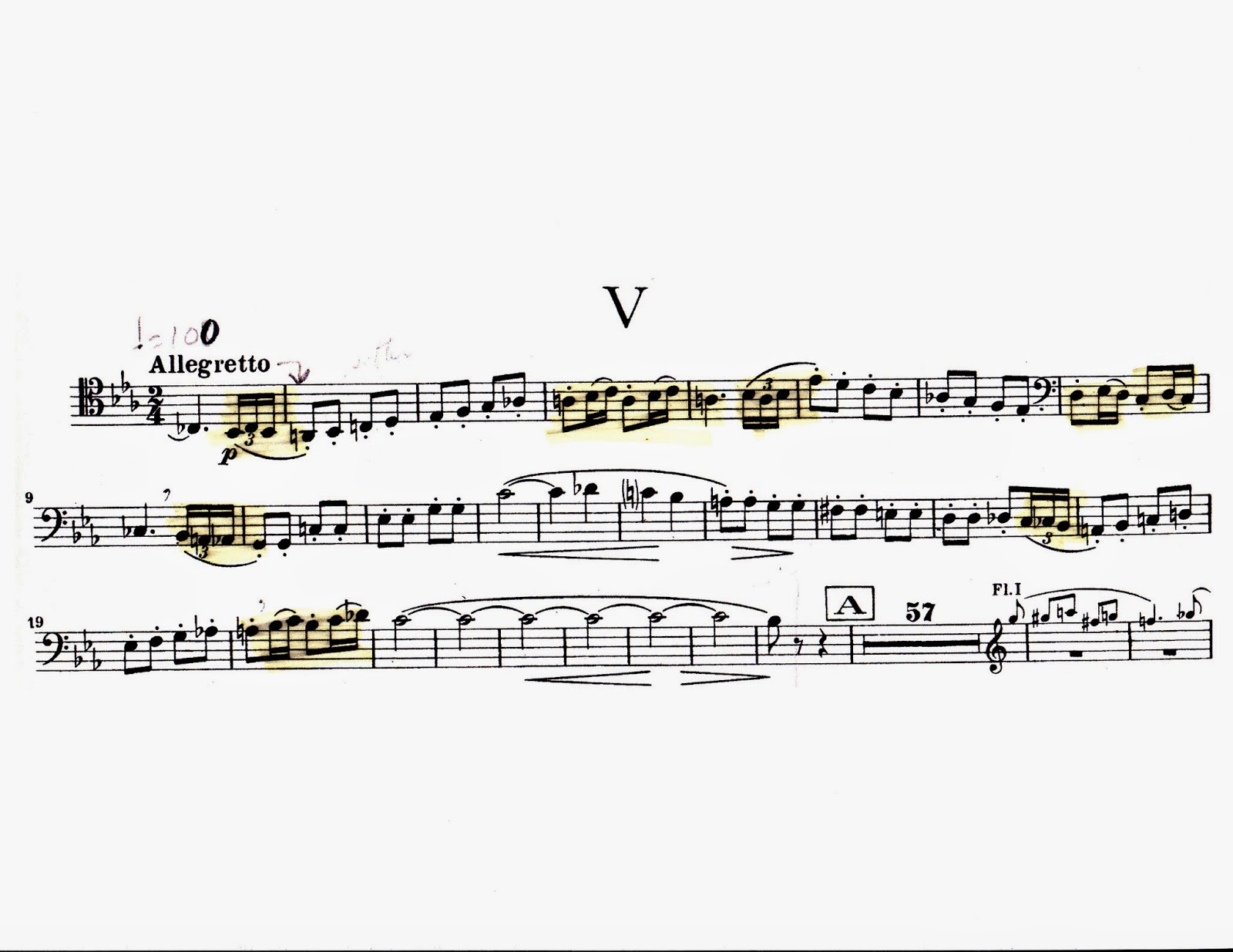 Imagine a regiment marching to the front to the beat of a drum. The sixteenths punctuate the steady trhythm of the eighths.

Play the sixteenths slightly louder than the eighths and make them lead to the next eighth. Have the sound of a snare or side drum in your head and you'll get the style just right.

The second motive is the group of steady eighth notes. 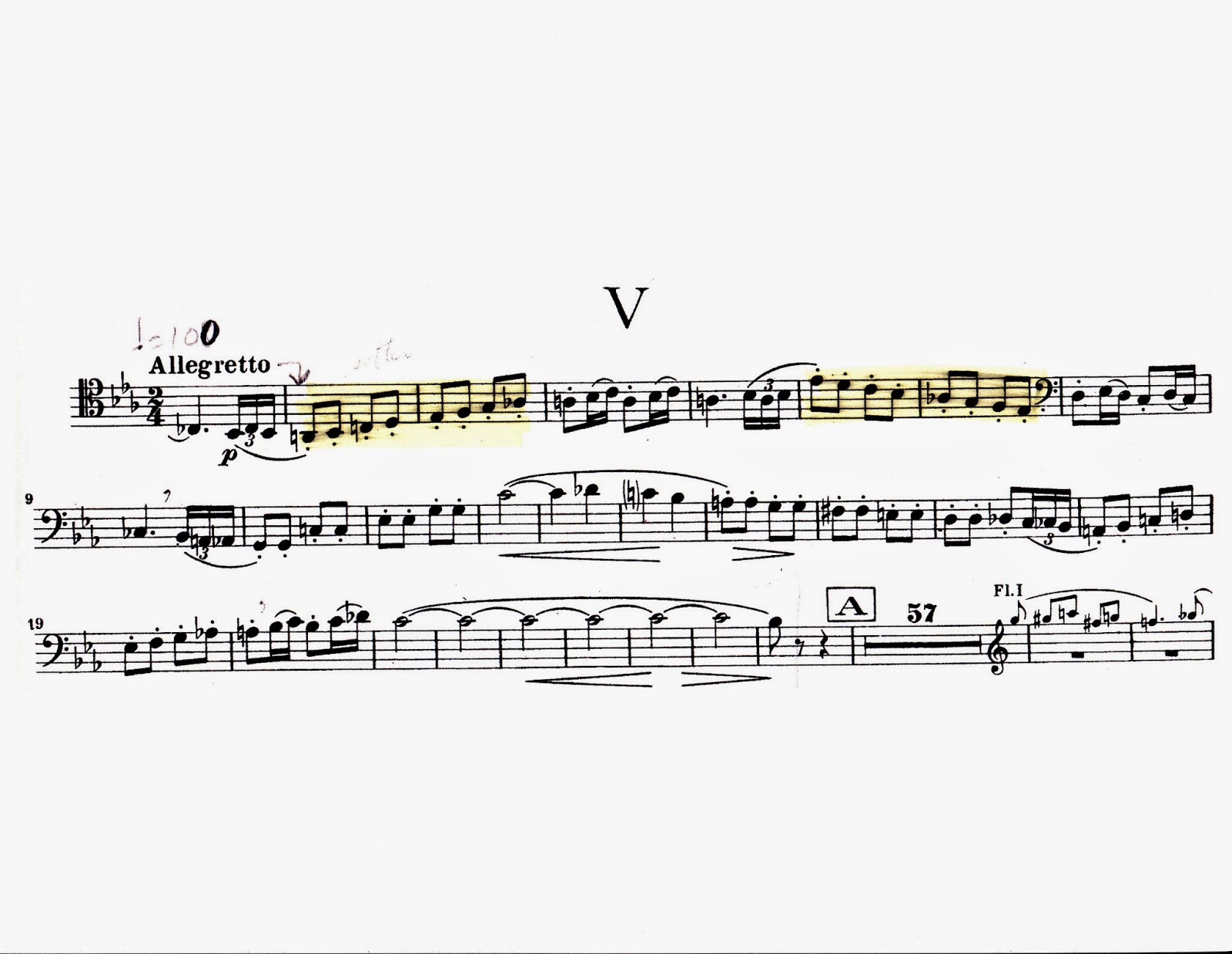 These are the men marching. Make the staccato consistent and dry throughout. Be careful not to creep into the "mf" range. The movement starts a bit slow for a march (♩=100), adds forces and increases tempo later on. No need to do this yourself.

There is occasionally a conductor who likes the bassoonist to accelerate to the end of this solo. Resist this if you can! Shostakovich writes no such indication and adds tempo changes later in the movement.

In my next post, I'll show how the harmonies of the 4th movement can help craft a solid interpretation of this piece.
Posted by Barry Stees at 7:51 AM No comments: