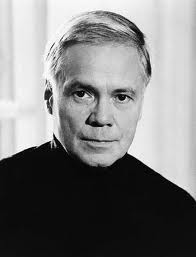 
On Friday, the musical world lost one of its great artists, German baritone, Dietrich Fischer-Dieskau. He was the most-recorded baritone of all time.  Although he excelled in opera, he made his reputation as an interpreter of the German Lied.

His ability to bring out aspects of the poetry in his singing was perhaps unequalled.  Here he is singing Schubert's "Erlkönig".  "Erlkönig" is a tour-de-force for any singer.  In this song, the singer must portray four different characters: Narrator, Father, Son, Erlkönig".


This is the best version, but no poetry.  You almost don't need it, because of his vocal inflections and facial expressions.

Here it is, anyway:


There have been many tributes in the news lately.  Alex Ross, the New Yorker Magazine Music Critic has blogged about him recently.

I never got to hear Fischer-Dieskau sing in person.  His influence on me comes only through his recordings.  I consider him one of the main influences on my approach to tone color, phrasing and vibrato among other things.

I have a friend in the Cleveland Orchestra studied violin at the Moscow Conservatory.  He recalls his teacher bringing in Fischer-Dieskau's Schubert recordings for the violinists to learn how to vary their vibrato to suit the expressive needs of the music.

There are many fine tributes out there.  I encourage you to do some exploring if you haven't come across this singer yet.  You are in for a treat!

I'll leave you with this recording:  This is Mahler's "Ich bin der Welt abhanden gekommen"


I am lost to the world
with which I used to waste so much time,
It has heard nothing from me for so long
that it may very well believe that I have died!

It is of no consequence to me
Whether it thinks me dead;
I cannot deny it,
for I really am dead to the world.

I am dead to the worldly bustle of things,
And I rest in a quiet place.
I live alone in my heaven,
In my love and in my song.
Posted by Barry Stees at 1:54 PM