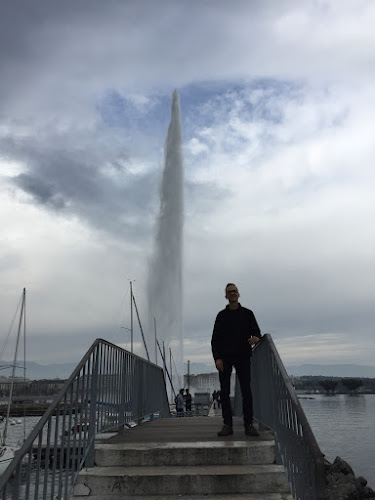 The Jet d'Eau in Geneva

I'm writing this from the cafeteria at CERN in Geneva. If my prose is a little lacking in self-confidence, it's because the IQ level in this room may be higher than in any other cafeteria I've ever been in!

I'm at the beginning of a 3-week European tour with the Orchestra, spending the first free days with my daughter and son-in-law in Geneva. He works at CERN.

Earlier today I went for a beautiful run along the shore of Lac Leman. There is nothing like good, vigorous exercise for getting over jet lag.

Like many Swiss cities located on lakes, there are very fine paths for bikes, hikers and runners to follow along the shore. My route followed the western shore of the lake, going out of the city, past the World Trade Organization headquarters, by the Botanical Garden, turning around after about 3 1/2 miles and going back. Yesterday, I visited the church at which John Calvin preached in the 1500's. St. Pierre's is notable for its lack of decoration or ornamentation, undoubtedly removed or destroyed during the iconoclasm of the Reformation

There were are few remnants, however, including a beautifully carved 15th century choir stall.

Here is a Flower Clock that Francaix would have liked! 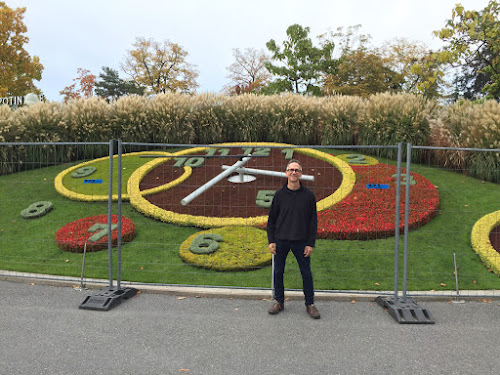 Tomorrow I will train to Brussels to be reunited with my bassoon and start the hard work of this tour. I now routinely pack my bassoon in the instrument trunk, due to its ivory bell. Our orchestra management has been successful in navigating through the shoals of re-entering the US with the Fisheries and Wildlife people. Traveling with it by myself, I would be tempting fate.

Posted with Blogsy
Posted by Barry Stees at 6:35 AM