Myth buster #2 -- Talent can flourish in any environment

Here's another good one: Artists are freaks of nature -- they're born with their abilities intact, don't need to work hard at what they do to achieve astounding results, etc. Best of all, the belief that talent is sui generis, doesn't need a particular environment in which to flourish.

Mozart is often held up as the most famous example of this. The movie, "Amadeus", exploits this idea.

However, the evidence doesn't support this theory.  Yes, Mozart was born with talent, but his environment and upbringing had much more to do with it.  At age 3 his father started him on a rigorous regimen of musical training. After a few years of development he took the kids on tours of Europe, exposing them to music by other composers, among other things. For more on this, read Neil Zaslaw's essay, Mozart as Working Stiff

Indeed, environment is extremely important in the development of talent. Young musicians need to be in a place where others like them abound, where the exchange of ideas, performances, etc. is easy and frequent. Geoff Colvin writes in his book, "Talent Is Overrated" that most young artists quickly absorb what their first teachers have to give them and then move on to a "master teacher" and often move to a different location, usually an urban center or place where artists live in close proximity.

Mozart eventually ended up in Vienna, the musical capitol of the Western World. It was a rich environment with dozens of composers, concerts everywhere.  A great place to thrive for a musician at the time.

For a similar view on the musical development of J.S. Bach, read James R. Gaines'  "Evening in the Palace of Reason" By reading it, I discovered that Bach came from a family of musicians and composers dating back to a century before his birth. Making music for him was as commonplace as video gaming is today!

One more example and then I'll stop. From the world of jazz:

It's easy to imagine that jazz musicians, because they improvise for a living and cultivate a "hip", aloof image, don't put in the hard work or need the company of others to develop. Nothing could be farther from the truth!

You only need to read about Kansas City in the 30's or Harlem in the mid-20th century to find out that these places were hotbeds of activity. Musicians at one club would go across the street on their breaks to another club to listen to or sit with another group.  There were contests and all-star nights. 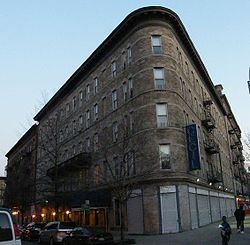 Minton's playhouse in Harlem is often cited as the place where Bebop was born. Read the wikipedia entry for Minton's, especially the sections on Monday Celebrity Nights, Cutting Sessions and Duels and Sitting in at Minton's to get an idea of the kind of crucible this environment was for the careers of many of the great jazz artists of the 1950's.

The Five Spot was another club in Manhattan in the East Village where jazz musicians, Beat poets, writers and abstract expressionist artists gathered. It's hard to believe that much of the music, poetry, art of the 1950s would have been produced without these places.

Below is a painting by Stan Landsaman  that was hung in the Five Spot and a photo of the club on a busy night. 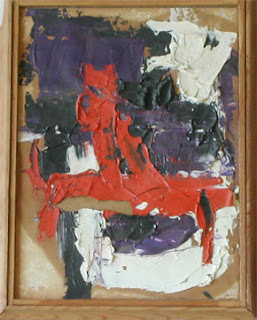 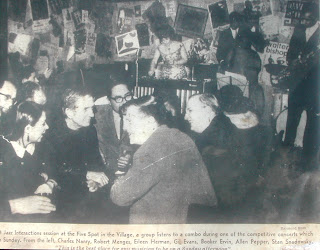