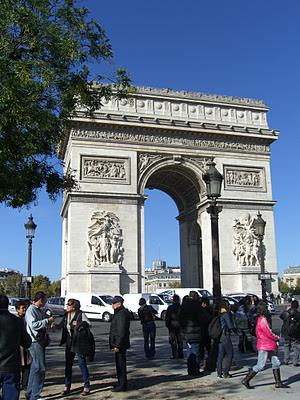 Our next stop was Paris.  We played two concerts in the Salle Pleyel.  This hall was opened in 1927.  On the first concert, Ravel conducted the world premiere of "La Valse". Stravinsky conducted the Firebird Suite on the second half.

Here is the place where Ravel lived during that time.  It's on the Rue Carnot right near the Arc d'Triomphe. 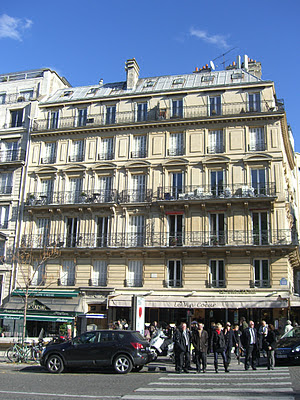 The Salle Pleyel, like all the other concert halls in Paris is surprisingly mediocre.  It has bright, boomy acoustics and it's very hard to play together on the stage.  There is a strange ricochet in attack from the back of the orchestra.  Articulation is very immediate and harsh.

We spent most of the morning rehearsal before our first concert working on ensemble issues caused by the bad acoustics.  We've played this repertoire a lot lately, so it's certainly not the case that we aren't familiar with it.  The hall environment made things difficult.

I'd like to digress a bit and talk about reeds and touring, as this was my main concern for these concerts.

We were about halfway through the tour at this point and the reed I liked best for the Mendelssohn 3rd Symphony was getting a little old and tired.  I spent a couple of hours in the hotel room breaking in several new ones I'd brought with me, but weren't ready for "prime time".

I really wanted to use something new for the Mendelssohn concert; something that responded easier, had more stable pitch and required less manipulation for dynamics and colors.  However, it became clear in the rehearsal that this hall exacerbated extremes in dynamics, colors, articulation such that fitting in and even hiding in certain passages was the wiser choice.

Oddly, I had no trouble projecting.  This is often difficult in brash, splashy concert halls, but not this one. So it was back to "Old Faithful" for the concert.  I found the concert a very stressful, difficult experience, but the audience was very appreciative, nonetheless.

You may wonder what I do to test my new reeds and how I know when to put them in the game. A hotel room is a very tough environment for good feedback on the reed's sound, so I rely on feel in the embouchure and how the reed takes the air I give it when I doubt what my ears are telling me.

I take a dial indicator with me and take the reed down to within a couple of thousandths of an inch of finished measurements.  The back of the reed near the collar may remain between .035 - .032" (about .002-.005" thicker than finished), but I take the tip area down to exact measurements or at most .001" thicker.

The crow pitch should be an F. This ensures that the reed will play well in tune and be stable, but flexible when necessary and have decent response.

After checking several reeds, sometimes it's not clear which one is really the best. To sort them out I do a couple of tests.

If a reed passes these tests, then I'll feel brave enough to try it in rehearsal.  Once in the performance space I almost always tweak the reed somehow, whether it's opening or closing the tip with pliers, scraping the tip some more, removing cane from the channels, etc.

I feel it's necessary to try to adjust the reed to the space in which it's being used.  Some people are nervous about making such adjustments while rehearsing or playing a concert, but, if the reed's nearly finished anyway, the adjustments I make are minimal.  After many years, I know a few things to leave alone (e.g., heart of the reed, shape, very tip). These are all set in place well beforehand.

I had some wonderful dinners in the Latin Quarter on my time off and went on a walking tour of composers' houses and apartments.  One place of importance for bassoonists is the Theatre des Champs Elysee, where the Rite of Spring had its infamous premiere in 1913. 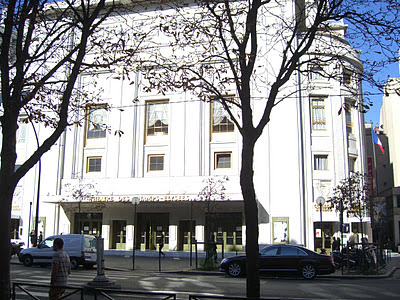 I found the Parisians less haughty and condescending than I had heard or noticed in the past.  We had great weather and I tried what little French I knew. Maybe that helped!
Posted by Barry Stees at 8:08 AM