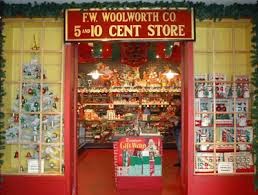 In this post I'd like to describe an improvement I've made to my bassoon which costs next to nothing.

I made the modifications with help from Ken Potsic, my repair technician. I also sought advice from Frank Marcus and Shane Weiler.

My interest in investigating this was sparked by playing with our new Second Bassoonist, Gareth Thomas. Prior to his audition he substituted with us for two weeks. His two weeks were separated by a few months, during which he had some work done to his bassoon by Benson Bell.

Thus, I was able to get a good "before" and "after" impression of the improvement gained by his work with Benson. The difference was stunning. His sound had much more depth and resonance when he joined us for a week after Benson's work.

When asked, Gareth provided me with a detailed description of the issue with his bassoon and the solution.

In a nutshell, the problem had to do with misalignment of wing and long joint tenons in the boot joint sockets. The misalignment caused chokes in the flare of the bore at these junctures. These chokes cause unnecessary damping of the instrument's resonance.

Among other things, Benson Bell re-drilled the sockets and fitted new caps in them, properly aligning the joints so the bore at the end of each of the tenons is now flush with the bore at the base of each boot joint socket.

This was corrected in later Heckel series as the body of the boot joint was made bigger (wider). By looking at the body of a newer bassoon, you can see that there is less taper in the body of the wood and, thus, less angling to the two bores.

By itself, the angling is not a problem. The issue comes with the need to link the wing and long joint together for a good fit in the left hand. Instead of continuing the angle imparted by the boot joint, fitting them together requires the bores to be more or less parallel to each other.

Thus, in an older bassoon with a more slender boot joint, the angle has to change slightly at the juncture of the boot large side and long joint, .

If the large boot socket and long joint tenon are not mated carefully during manufacture, a misalignment can result.

Because of the sizable improvement to Gareth's bassoon, I was curious to know if my instrument had some of the same issues, and if the bassoon be improved by addressing them.

The wing joint tenon has been replaced on my bassoon and mates precisely with its socket in the boot joint.

The long joint/boot intersection was another story.

I checked the bore at the four compass points by sliding the dowel through at those points. As the dowel passed through the junction of boot and long joint, I could feel the end of the dowel catch at one of the points.

If there is a catch, the dowel is hanging up on the end of the long joint tenon. The tenon end is protruding slightly into the bore, causing the choke. Sometimes this can be seen by looking through the assembled bassoon from the bottom of the boot joint, large side.

Often the protrusion occurs on the part of the tenon end facing away from the wing joint. This was the case with my bassoon.

While conferring with Frank Marcus, who had examined Gareth's bassoon, he suggested a simple method I could try on my own to see pursuing a modification like Gareth's would improve my bassoon.

Frank restored my bassoon back in 1997, so I have great respect for his work. However, the beautiful ivory that still adorns the bell of my instrument makes transport to and from Canada with the bassoon very risky. He suggested I send it without bell, but I wanted to have the bell with the bassoon to try before and after. Thus, he devised this solution to try on my own.

As the choke in my bassoon was caused by the long joint tenon end protruding over the lip in the boot socket at the side of the bore facing away from the wing joint (or closest to your thigh when playing), putting a few layers of tape on the outside of the opposite side of the tenon might put the tenon into better alignment. If the tenon fit in the socket wasn't too snug there would be room for the extra tape.The added thickness on one side of the tenon would move the tenon over slightly.

I took the bassoon to Ken Potsic who put two layers of medical tape on that side of the tenon cap. 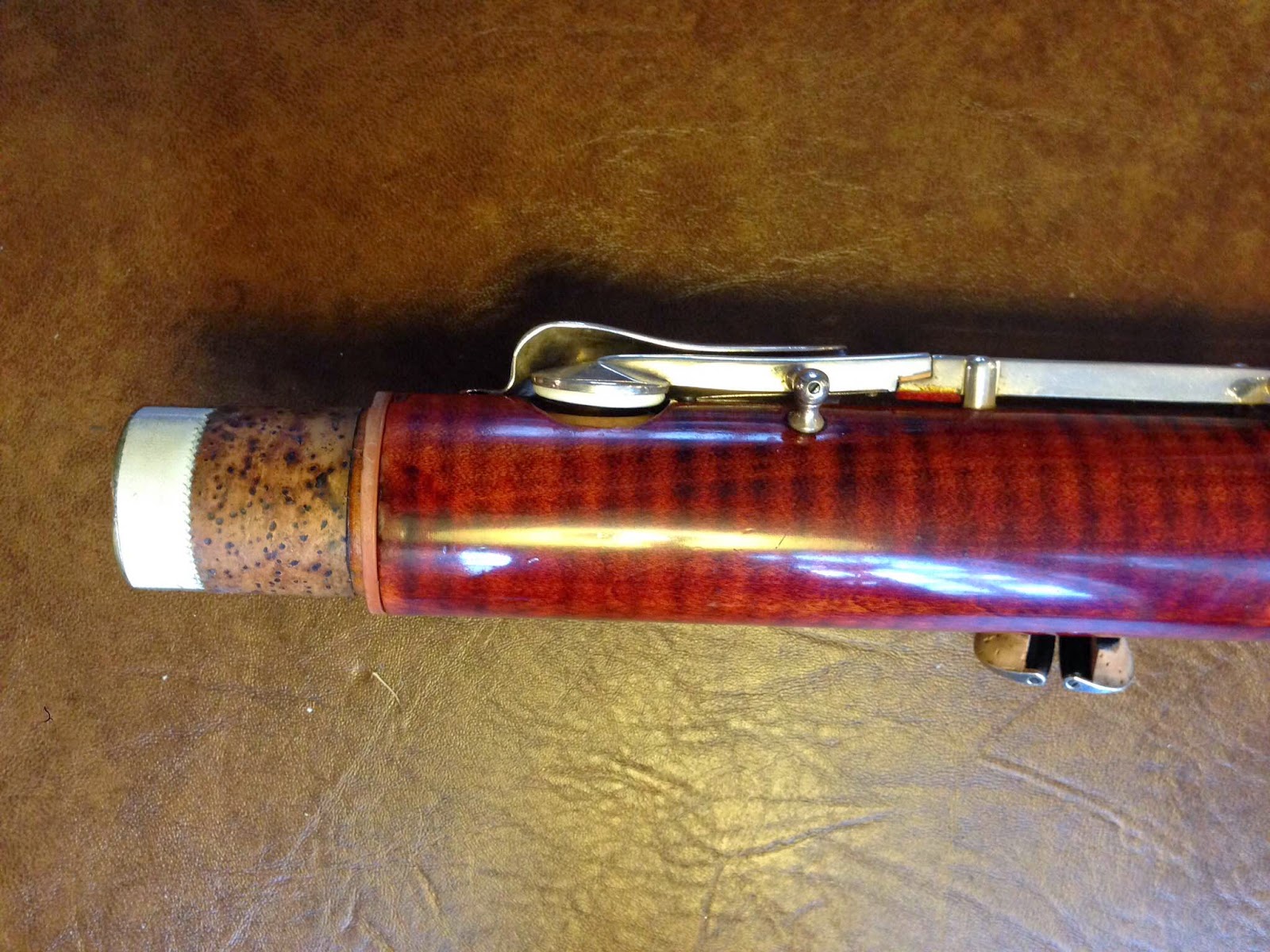 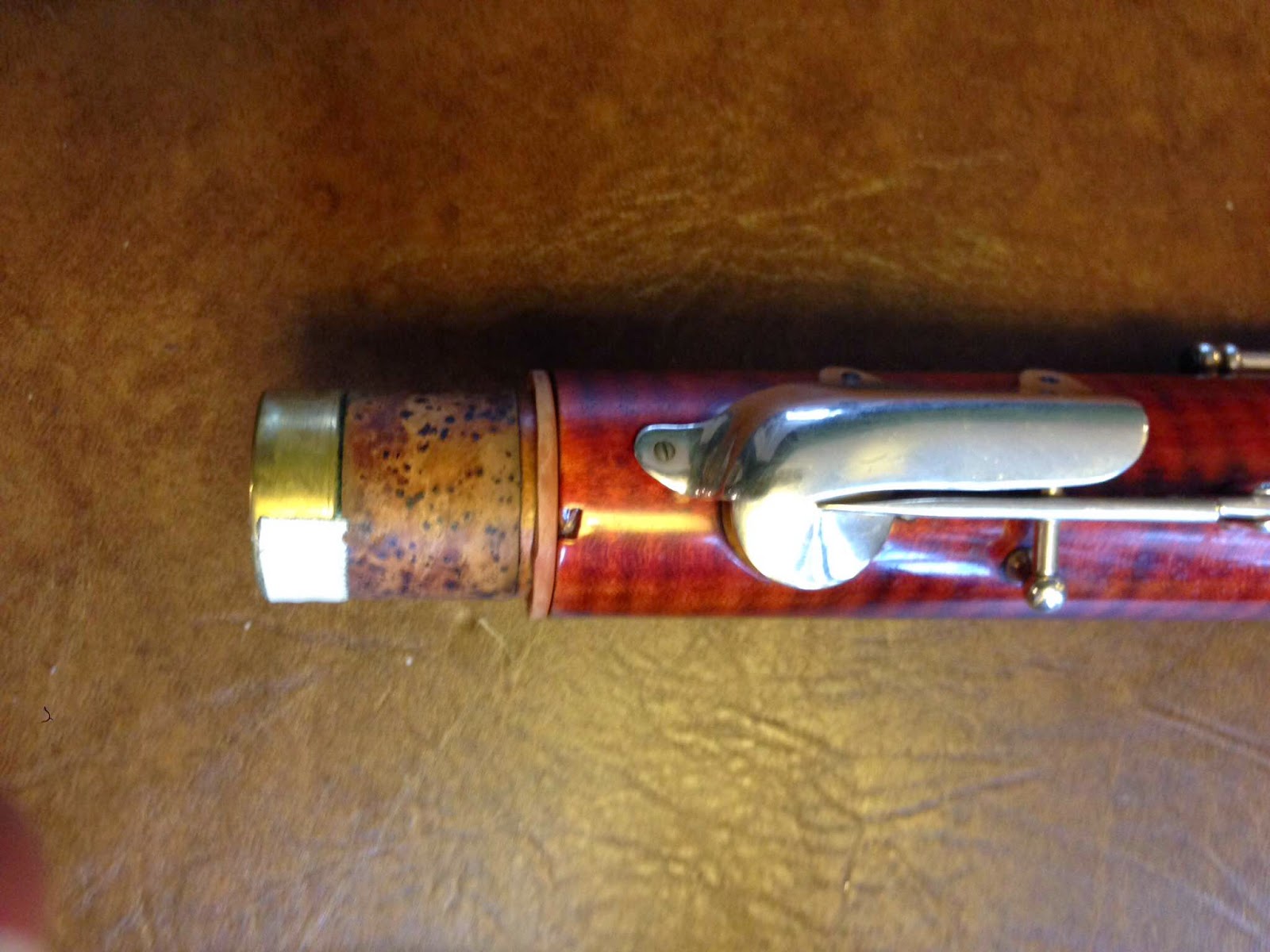 We found there was room for the tape. Tenons usually make contact with sockets at the cork or string wrap, so sometimes it's necessary to sand off a little cork or remove string to make this adjustment.

However, we were able to fit the joints together without any removal. I checked the bore with the dowel again and noticed no catching at the juncture this time.

I played the bassoon. Then we removed the tape; I played. I repeated with tape and without. We both noticed an improvement in the resonance of the bassoon and a smoother, more homogeneous scale with the tape in place.

Being naturally sceptical -- and since we were in a house basement (not a good acoustical environment) -- I replicated the before and after taping trial in Severance Hall.  I heard the same results.

Then I measured the bore in the boot joint where it meets the long joint tenon (at the base of the socket).

I noticed that the bore was actually a bit larger in the boot joint than at the tenon end -- also a factor in the choke, since the bassoon bore is conical and the flare continues from boot to long joint. Perhaps at some point, I'll have the bore at the end of the tenon enlarged slightly.

Many bassoons have a metal reinforcing ring on the end of the tenons for protection. My bassoon has one on this end of the long joint. I measured the thickness of this ring (outside diameter minus inside diameter).

Then I measured the thickness of the wooden lip in the socket. Ideally the lip should be exactly as thick as the tenon end cap. The lip in my boot socket varies in thickness throughout its circumference. It is quite thin at the point where the choke occurs.

The lip is about .020" thinner than the tenon ring. So not only was there a misalignment at this point, there was also a difference in thickness of the two fitted parts.

Therefore, I placed some tape strips in the boot joint bore right where it meets the socket, effectively narrowing the bore and thickening the lip in the socket. 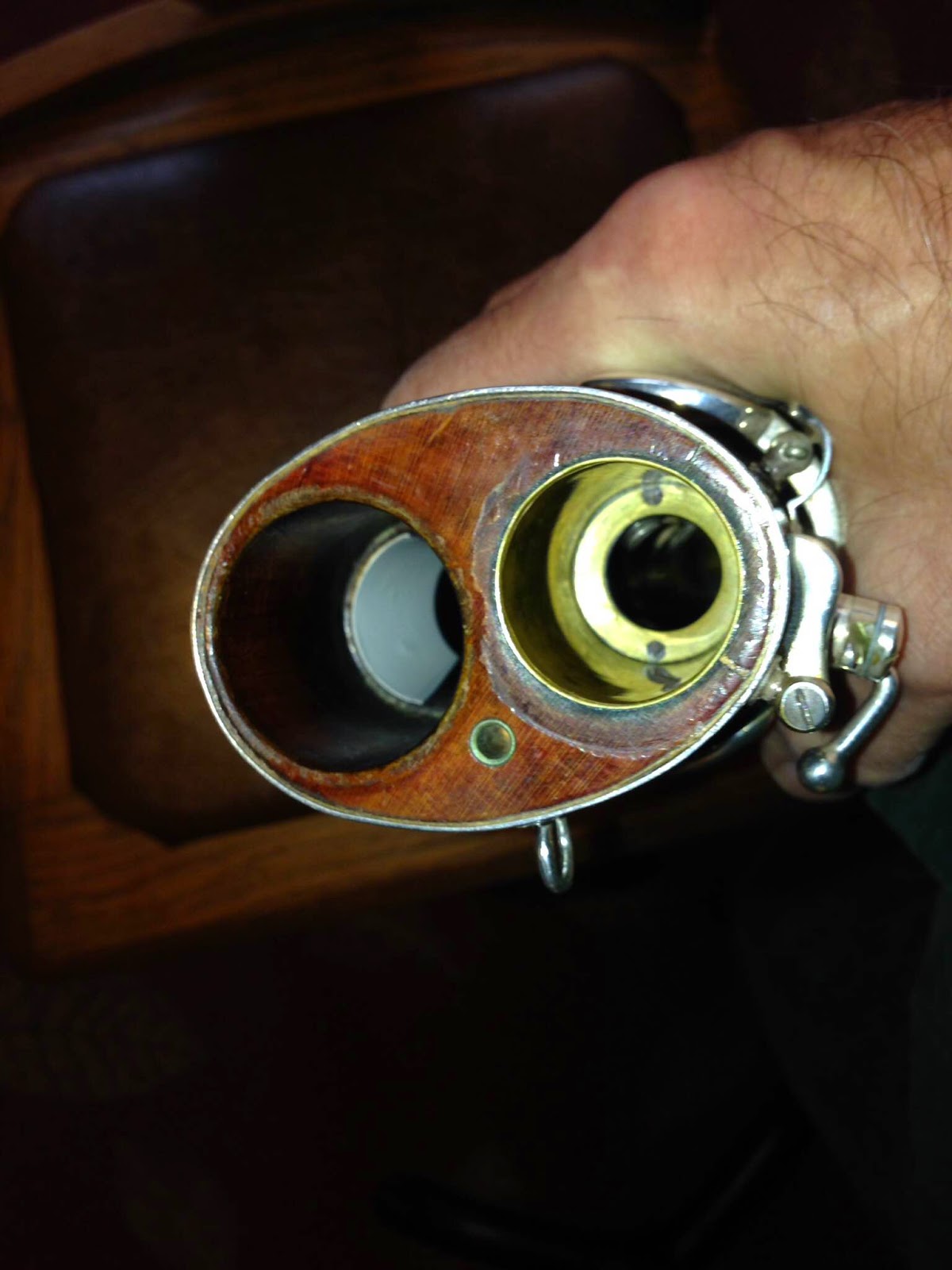 The addition of this tape removed some of the choke. A playing test revealed that this modification also added resonance to the instrument.

At this point, I'm not sure if I'm going to move forward with a more permanent modification to the bore. I like the "Dime Store" solution which Frank Marcus devised. While not a perfect fit, I'm sure, I'm certainly enjoying the increased resonance of a better fit at this juncture.

Perhaps in homage to two master repair technicians of the past who loved finding economical solutions to problems, I'll leave things alone.

I'm speaking of Lewis Hugh Cooper, who solved many problems with tape, matchsticks and paraffin wax and Hans Moennig, who did magical things to bassoons using dimes, sawdust and other things laying around his shop!

Email ThisBlogThis!Share to TwitterShare to FacebookShare to Pinterest
Labels:Intro Tools on the Cheap