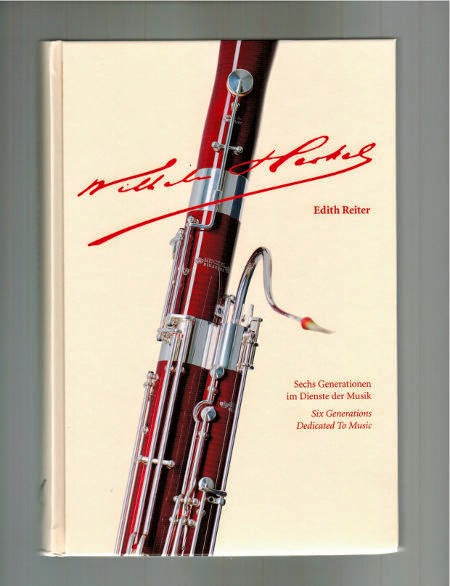 I have just finished reading a wonderful book about the Heckel Company. Its author, Edith Reiter, is a member of the Heckel family and ran the company for many years. She has retired and now has written this history of the firm and family.

The history covers the span of the company from the historic joint effort by Johann Adam Heckel and Carl Almenräder in developing the modern-day bassoon in the early 19th century right up to 2013.

The book will appeal to bassoonists in particular, of course. However, many readers will learn -- as I did -- that Heckel made all the woodwind instruments and many brass instruments until World War II, supplying orchestras and bands in Germany and around the world.

The book is lavishly illustrated with many historic photos and reproductions of documents. We can see the receipt for purchase of a Heckel bassoon by Julius Weissenborn. The collaboration with Paul Hindemith in composition of music for the Heckelphone is documented in text and with a photo of his visit to the workshop in Biebrich.

In the back of the book are lists of all the instruments sold by Heckel for which they have records. Each instrument is listed with a serial number (if applicable), date of delivery and country of delivery (if known).

If you own a Heckel bassoon -- especially if you are not the first owner -- this listing may shed some light on your instrument's history.

It is fascinating to chart the rise and drop in production of Heckel bassoons over time. No German firm was exempt from the vagaries of two World Wars, hyperinflation and economic depression during the 20th Century.

The World Wars hit the Heckel family personally. August Heckel died in battle in September of 1914, an early casualty of World War I. Edith Reiter documents the shell shock her sister Gisela suffered during bombing in World War II. Indeed, the factory was damaged during that time.

By scanning the serial numbers and dates you can see production rise as Germany rose out of the hyperinflation of the early 1920's (I have a 1 million Mark note from that time, sent to ancestors in the U.S. by German relatives). Orders from the United States really picked up during this time. Dozens of 7000 series Heckels were delivered to the United States in the summer of 1930 alone (including the bassoon I play!).

As World War II approaches you can see the effect of the Molotov-Ribbentrop Pact as orders from the Soviet Union pick up during that brief time. The orders drop precipitously after the German invasion in 1941.

After the war, American orders pick up again. Edith Reiter credits many American supporters and customers with helping the firm get back on its feet during this time.

She graciously shares many personal stories about herself and her relatives that make the history of the company come alive. As the only woman apprentice in the factory during the 1950s, she was viewed with suspicion (the boss's daughter!) by some of the workers. Her father ordered all nude photographs removed from the shop floor. I guess machine shops are the same everywhere!

The book is in a side-by-side bilingual format -- German and English. English readers not comfortable with German can read straight through by just skipping over the pages in German.

The English translation is good, but not perfect. Some technical terms are mistranslated. When referring to keypads, the German word, "das Polster" is translated as "pillow" -- a funny image of little pillows under the keycups on a bassoon appears in your mind.

As with many German nouns, the word "das Rohr" can be translated variously. It can refer to anything resembling a pipe or anything that has a bore. It would have been helpful if the translator had been more careful in checking when the word "reed" is intended instead of "bore" or even "bocal".

Perhaps in a successive printing, these minor issues can be addressed.

I'm sure many music dealers who cater to double reed players sell this book. I purchased my copy from TrevCo-Varner Music
Posted by Barry Stees at 9:39 AM