On Monday and Tuesday of this week the Orchestra had a residency at Indiana University.  This involved master classes, a side-by side rehearsal, a concert of our own and other activities.

Jonathan Sherwin and I played in a Side-by Side orchestra with IU bassoonists, Danielle Osbun and Bobby Phillips. 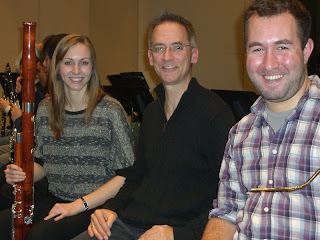 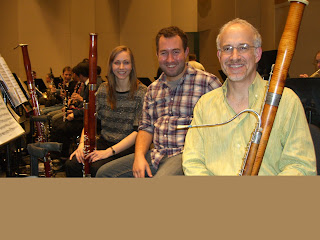 After the Side-by-Side, I went for a 14-mile run with Jack Sutte. This was my last long run before the Miami race.  It was cold, but not as bad as Cleveland.  We went through most of Bloomington, circled back by some farm country, ended up back on campus, showered and went to a late dinner.

Rehearsal and concert the next day went very well. One of the most fun activities during a tour is going out with old friends after a concert.  I met Tim Clinch and Cynthia Carr and a former student of mine, Oleksiy Zakharov, who is now playing second bassoon in the Indianapolis Symphony for dinner. Cynthia and I were at Eastman together, Tim and I played in a recital at Northwestern quite a while ago. 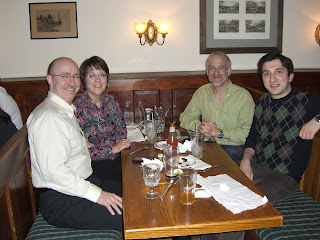 In  the morning I had a quick breakfast with another former student, Dewayne Pinkney, who is working on a DMA at IU.
Posted by Barry Stees at 2:13 PM