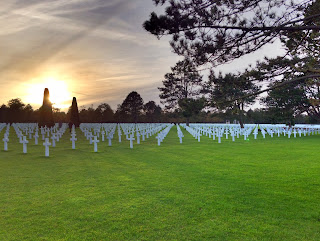 This week on our day off, four of us rented a car and drove up to the coast of Normandy. You can get to the beaches from Paris in about 2 hours. We stopped in Deauville, had lunch and looked around for a bit and then drove to the area the of Omaha and Utah beaches.

You can spend the whole day, weekend or longer driving along the 50-mile stretch of beaches at Normandy, stopping where you want.  There are lots of memorials, museums, etc. There are also excellent guided tours.

Since we just had the day, we decided to go right to the American landing sites and look around for ourselves.

We arrived just as the flag was being lowered for the day at the American cemetary (see above). Below is a photo taken at sunset from the Point du Hoc -- an outcropping that was heavily fortified by the Germans.  You can see the bunker they built in the photo. 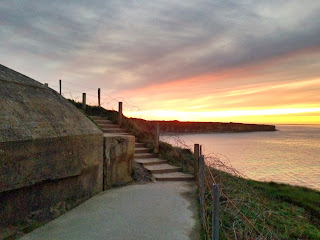 The landscape is dotted with similar cement fortresses, some more or less intact, others blown to bits and still scattered.  Shell craters abound. 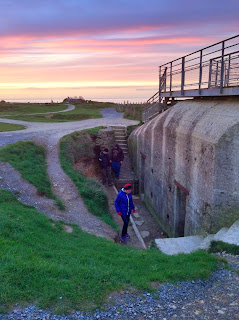 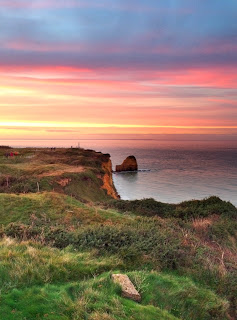 The sacrifices made at Normandy are hard for my generation to imagine. Looking at the sheer cliffs, it's hard to imagine how our troops held the beaches, especially with fortified machine gun and artillery bunkers like the ones above overlooking the landing sites.