To start our tour we made a short stop in New York. Not originally envisioned as part of this European tour, it was added after the fact. We played in Avery Fisher Hall as part of the White Lights Festival. The term comes from a quotation by Arvo Pärt in which he describes his music as having the characteristics of white light (White light contains all the colors of the light spectrum).

Our program was  indeed colorful, but perhaps Olivier Messiaen's "Trois Petite Liturgies" with its kaleidoscopic tonal palette fit the Festival's theme most exactly.

I played on the Beethoven Mass in C Major. Overshadowed by the  Missa Solemnis, it is a beautiful, concise work. We performed it with our Chorus and will feature it several more times during our tour.

The Cleveland Orchestra Chorus has not toured with us for several years. It is a pleasure to have more Clevelanders with us on this trip.  Their itinerary doesn't exactly match ours as there are several programs on this trip that do not use the Chorus.

They had a long day: travel, performance and then travel.  The Orchestra flew the Chorus back to Cleveland right after their performance to save on hotel rooms.  The Chorus will not join us until Frankfurt a few days later.

After the Avery Fisher concert, Phil Austin, his wife Emily, who is a Chorus member and I met Lenny Hindell, former Second Bassoonist of the New York Philharmonic for a late-night snack. 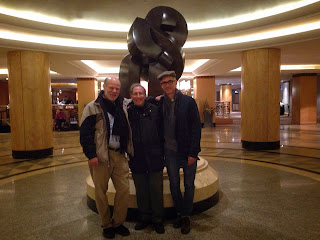 The next day I went for a run in Central Park. The finish gate for the New York City Marathon was still up (the race was two days earlier).  One day I hope to run THROUGH that gate!

After my run I cabbed uptown to the Manhattan School of Music where I gave a master class.  Before hand I stopped in for an espresso at Kuro Kuma nearby. 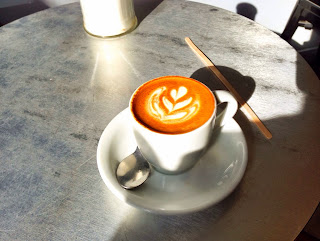