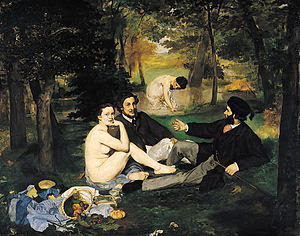 Our next stop was Paris. We were booked for two concerts in the Salle Pleyel. The Salle is near the Arc de Triomphe, a few miles away from the center of Paris.

In a previous post I described some musical walks I took in Paris. This time I'd like to discuss where to go running. Paris is a big, busy city with lots of traffic of all kinds, so running can be frustrating and even dangerous.

However, there are some good places to go. The public areas around the Louvre and Tuileries are fine for short runs of a couple of miles or so. The Parc Monceau around the corner from our hotel is also fine for quick exercise.

If you want longer runs, though you have two choices (at least these are the obvious ones). The first follows the riverside promenades by the Seine. While these don't cover the whole length of the river through the city, they are very nice and give views of the city you can't get elsewhere.

The other place that affords the runner the opportunity to really stretch out and get away from the city while remaining reasonably close is the Bois du Boulogne.

This is a large area that has lots of woodsy paths of all kinds from dirt to pavement. There are numerous routes to take and plenty of things to view while running.

And I do mean plenty . . . for these woods have been used for centuries by those practicing the world's oldest profession! In the more remote areas, bikers, walkers and runners will encounter women plying their "trade" in various forms of attire (or lack thereof).  Some have vans or huts in the woods for use with patrons.

If prostitution is illegal in France, the law is certainly not enforced in the Bois du Boulogne. We saw plenty of cars stop and wait at curbside for the "workers" to appear.

One of Manet's most famous paintings deals with the subject of prostitution in the Bois.

Le Dejeuner sur l'herbe is the painting above.