Along with 25,000 other people, I ran the Miami Marathon last Sunday. Actually, I ran the half marathon part of the race, as usual.

This was the fifth time for me for this race.  It's got to be one of the most beautiful race courses in the country.

This is a photo of the start of the race. It begins at the American Airlines Pavilion (on left in photo) where the Miami Heat plays their games.  I won't go in the building to see a game anymore because a certain former Cleveland Cavalier plays there now.

Then it goes over to Miami Beach via the MacArthur Causeway.  At this point the sun is not up yet.  The bridge has purple lights shining across the water.  To the south you can see the cruise ships docked at the port. 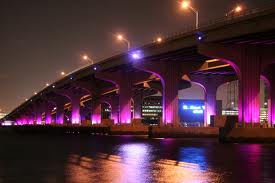 Once you get to the beach the sun has started to rise.  As you run north it's easy to see some of the clubs are still open and going strong.  There are a lot of spectators along the course cheering. 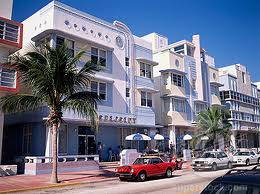 After eight miles, the course goes back across the water on the Venetian Causeway.  This part of the course is made up of roads through very exclusive residential areas built on small islands joined by bridges. Below is a photo of an aid station on the Venetian Causeway during this year's race.  It's a big job helping the runners to stay hydrated! 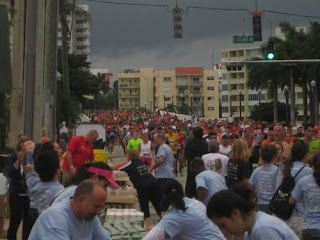 Once back in Miami proper, the course goes through a rather sketchy section of Miami before veering off from the marathon course to finish in a park just south of the basketball arena.  By now, if it's sunny, the usual heat and humidity begin to take their toll.  It's a good time to finish.

Since I'm a very competitive person, I thought about what might have slowed me down this year.

Besides being a year older, I missed a good couple weeks of training in December battling a nasty sinus infection, so perhaps I wasn't quite in tip top shape.

Also, it was hard to avoid indulging in holiday eating and drinking.  Being 5 pounds lighter might have helped.

Maybe the biggest factor was the start, though.  I think there were about 8,000 more runners compared to last year.  The corrals were jam packed with people.  It took me seven minutes just to get to the starting line after the start.  It took a couple of miles for the crowd around me to thin out enough for me to safely run my race pace.

I love running this race and will do it again if we're down there at the right time next January!
Posted by Barry Stees at 5:11 PM