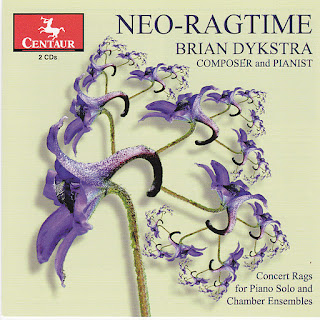 I'm excited about a new recording that's just come out. It's a 2-CD set of music inspired by ragtime by composer/pianist, Bryan Dykstra.

I'm playing on two of the pieces -- Curly Maple Rag and Lancashire Rag. These pieces were originally written for Chicago Symphony Principal Bassoonist, David McGill when he was playing in our orchestra.  The title of the first piece alludes to a type of maple sometimes used in bassoon manufacture.  The second is the name of the street on which David lived when he was in Cleveland.

I really enjoyed working on these pieces with Bryan, who is Professor of Piano at the College of Wooster here in Ohio.  He was inspired by the ragtime fad of the 1970's typified by the music of Scott Joplin used in the movie, "The Sting".  Bryan's compositions, while not slavishly imitative of Joplin's music, exhibit the same carefree lilt and danceable quality of original ragtime.

In addition to the two pieces for bassoon and piano there are many for solo piano, and other woodwinds with piano.

I'm especially happy with how the recording of my sound came out in this project.  The sessions were done at Audio Recording Studio in Bentleyville, Ohio by Bruce Gigax, who is also the audio engineer for the Cleveland Orchestra.  Bruce worked magic on my sound in his studio and the results really show!

Here is a short clip of "Curly Maple":

And here is one for "Lancashire":

For music, please contact one of our trusty double reed music dealers like Trevco-Varner or Gail Warnaar's Double Reed Shoppe.

For a CD, visit Centaur Records. I will not be selling this CD myself.
Posted by Barry Stees at 11:21 AM