Using the same argument as I did in a previous blog about the opening phrase of the first movement of the Mozart Bassoon Concerto, I'd like to look now at the second movement.

This is one of the most beautiful pieces of music ever written for the bassoon, in part because of its sublime first phrase:

In nuts and bolts music theory terms it can be described as a  long note rising a perfect fourth with a grace note above that decorating a 4/3 suspension on a strong beat and a resolution.

The argument I used for the first movement was that Mozart, when writing the first phrase of that movement was using a motive he'd developed over time and used in other pieces prior to writing the Bassoon Concerto.  He used it again a few times after that.

The same holds true for the first motive in the second movement.  Here are some prior examples:

Below is the opening of the first movement of his first string quartet, written well before the Bassoon Concerto (followed by a listening example): 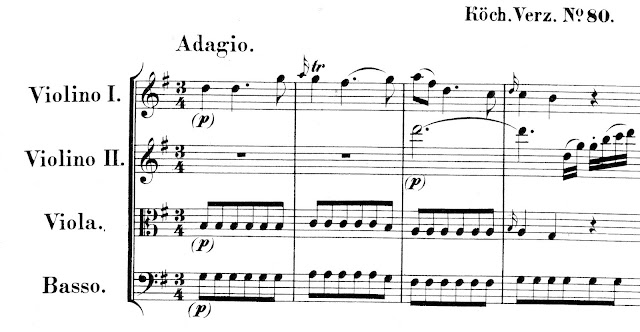 Next is his string quartet, K. 172(note the same intervals and suspension in the 1st violin on beat 3):

In this listening example, the second movement starts at about 4'15" in.
Here is Mozart's ultimate setting of the figure:  "Porgi amor", the Countess's aria from The Marriage of Figaro.

You can see and hear how rich the raw material of this motive was for Mozart!
By the way, I can't claim to have discovered any of this myself!  Stanley Sadie in his book, "Mozart, the EarlyYears" makes the connection between the Symphony and string quartets excerpted above and the theme for the second movement of the Bassoon Concerto, calling it the "Porgi amor" theme.
Musicologist Neal Zaslaw, draws a similarity between the theme and "Che faro senza Euridice" from Gluck's "Orfeo et Euridice" from 1764.  This was a highly influential opera and "Che faro" is the most performed aria from it.  Perhaps Mozart knew this music.  Look closely at measures 3 and 4 and you'll notice a similarity.

A conclusion to be drawn from all this is musical themes don't exist in a vacuum.  They are permutations of motives with the composer has been working, sometimes for years.  They bubble up from a holding place somewhere in the brain and get reworked and put in a new context.  Old wine in new bottles!
Posted by Barry Stees at 6:12 PM