You're looking at what has arguably become the most important phrase ever written for the bassoon!

While there is much other great music written for our instrument, the nearly exclusive use of the Mozart concerto in auditions has made this opening phrase extremely important for bassoonists today.

At our recent second bassoon audition, I had a chance to sample what some of the best bassoonists do with this phrase in an audition.  Since it's the first music we hear from a candidate, the phrase serves as a musical handshake -- a first encounter with that person's musical beliefs.

Many on the committee that day felt the handshakes coming from the Mozart were more like vise grips!  Excessively firm and rough.  The first note was often played as though the person shaking your hand was in a hurry to get to the next person in line -- extremely short and accented.

Another trend we noticed was -- along with chopping off the first note -- a tendency to treat the second note like a stressed syncopation.  Thus, the first phrase came off sounding like "dut-DAHH"!

I've thought about this trend for a while and have come up with a couple of possible reasons for why this mannerism has grown like a virus.
But is this effective?  Is this musical?

Is there a precedent in Mozart for this motive?  If so, can we understand what he might have thought it should sound like when composing it?

Let's take a step back and provide some context for the Concerto.  Written in the summer of 1774, it's generally agreed that this was Mozart's second original concerto, the Violin Concerto #1 being the first. The earlier piano concerti are all arrangements of works by other composers and heavily influenced by Leopold Mozart (whose influence is now given even more weight in the early compositions than was once assumed).

All composers used models for their early work. Even Mozart did not compose new pieces without referring to the work of others or his previous work.  This is especially true of his youthful compositions.

In understanding the context for the first motive of the Concerto, it's important to acknowledge that many composers used motives, themes, etc. over and over again, reworking them for the different pieces they were writing.  This is the nuts and bolts of composing.

All of which is to say that the first notes of the Bassoon Concerto are not a unique musical gesture.  They are simply one variation on a larger theme at work in Mozart's mind around 1773-1774.

Here is how the opening motive is stated in the Violin Concerto #1 of 1773. 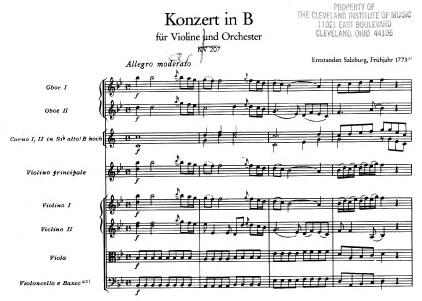 Below is the opening of the Bassoon Concerto. 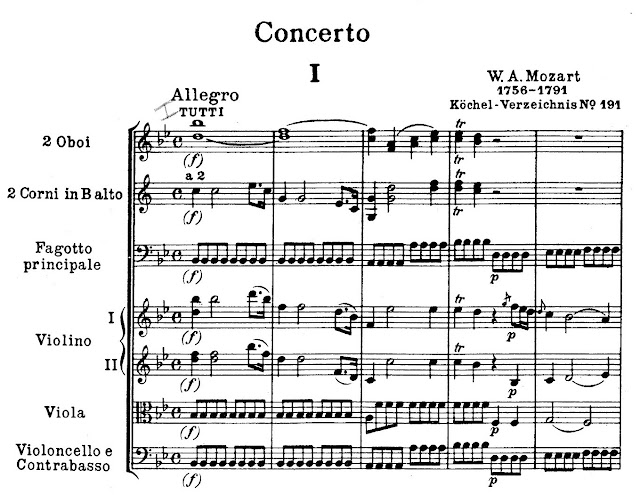 Note the following similarities:
Now listen to the opening of both pieces:

I didn't label the two clips, so you might be surprised at how similar they sound at the start! 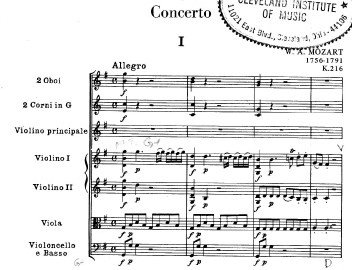 Above is the opening of the Violin Concerto #3, written shortly after the Bassoon Concerto.  Notice the similarity of motive (quarter, dotted quarter this time, though), with bar one on the tonic, bar two on the dominant.

Listen to the opening:

Once again, the similarity is obvious.

Now, let's look closer at the scoring.  It's interesting to note that each concerto begins with double or triple stops in the violins.  Clearly, Mozart wanted a full, rich sound on the first note.

In order above are:
If you accept my argument that these motives are closely related in rhythm and scoring, then it follows that the bassoonist should play the opening motive with this context in mind.

Therefore, a short, and unemphasized first note has no place in the style of the Bassoon Concerto!

The violin cannot play a note as short as the bassoon, since the violin is a naturally resonant instrument. (The bassoon is not - see Arthur Weisberg's The Art of Wind Playing for a good explanation of this phenomenon.) In addition, the violinist must grab two or three notes at the same time.  Time and space must be made for this to happen.

For the bassoonist to execute the opening in a musically appropriate fashion, therefore, he/she must leave time and energy for the first note to sound and place the second note carefully.

A great image for success in execution is to imagine two down bows. The first down bow uses the whole bow, the retake for the next note provides just the right amount of separation before starting the next note.

Here's a great example of this technique.  Joshua Bell plays the Saint-Saëns Introduction and Rondo Capriccioso.  Start at about 9 minutes in and you'll hear the cadenza.  In it there is a series of dramatic down bow notes.  Notice the length and spacing required for this group of notes.  It's perfect for the opening of the Bassoon Concerto!

I do not believe the second note (half note) is a syncopation.  A syncopation is rhythm in which a note other then a downbeat or a note on a strong beat is emphasized.  Look at the scoring of the three pieces above once more and you'll see that Mozart, in putting violin chords on the first beat, was quite clear that the second note in the bar should not be emphasized at the expense of the first note.

So what we are left with is two notes of equal strength separated by just enough space to make each sound clearly articulated.

That was a lot of time and space spent on two notes!  However, as I said above, these two notes are often the first sounds someone who is evaluating your playing hears and thus, makes them very important.  It would be interesting to know what Mozart would have made of all this fuss about his little Bassoon Concerto!

Here is a link to a recent performance of the Concerto by David McGill, the Principal Bassoonist of the Chicago Symphony Orchestra.  It's one of the finest live performances of the piece I've ever heard.  The streaming will be available until the middle of March, 2012, so listen soon if you can.  The Concerto starts just before the 15 minute mark.