Technology is neither bad nor good.  It's in the use of technology where we find good and bad choices. The classic example of this is in the harnessing of the power of the atom.

Through technology, musicians today have more access to music and recordings than ever before.

Through YouTube, I-Tunes, Naxos Music Library, IMSLP and other sources one can find just about anything, much of it free or extremely inexpensive.

With this much access also comes responsibility.  In a discipline like classical music, it's important to be discriminating.  However, none of these sites offer critiques, editors or even aggregators to help the consumer find the best edition or best recording. While you can find discussion of the merits of a performance on YouTube, often the commentators are anonymous.

In a performance on YouTube of a mass by Josquin des Prez, we don't know whether the commentator is a musicologist/conductor who's specialty is music of the Northern Renaissance or simply an enthusiastic teenager reacting to her first hearing of this kind of music.

Like most things on the Internet, discernment is in your hands.

In a previous post, I discussed some disturbing trends in interpretation of the first phrase of the Mozart Bassoon Concerto.  One commentator, Mike Macaulay may have uncovered one of the reasons for the tendency to play the first note short and accent the second note.

Here is the first page of the concerto as listed on IMSLP:

This is the Peters Edition.

Here is the first page of the Universal Edition.

As you can see, no staccato, no accent.  We are left to ask, "WHO put them there".  This question can only be considered if you have access to the earliest source.

Not until we are able to see the original or "Urtext" can we really be sure what the composer left and what an editor has added.

Note the dotted line slur in Universal measure 4 and the editor's suggested rhythm for the grace notes in measure 5. Both suggestions are made so that we can see the original AND the suggestion at the same time.  This is correct practice for editions.

In the case of the Mozart Bassoon Concerto we don't have the original manuscript. The Universal Edition uses the first edition, second printing of the piece published by Andre Offenbach in 1805.  Mozart's widow, Constanze sold many of her husband's manuscripts to Offenbach after his death to pay her debts. This is the earliest edition we have and, therefore, must be considered the most authoritative.

For years many American bassoonists learned the Mozart Concerto using the edition made by J. Walter Guetter, one of the preeminent bassoonists of the 20th Century.  This is the edition I used when first learning the piece.  While the edition contains many fine ideas for interpretation, it is vastly different from the Universal.

I was shocked to see the Universal Edition after so many years with Guetter. There were so many mannerisms in my interpretation that no longer made sense after looking at the Universal.

Here's an edition of Milde Concert Study #27 from IMSLP: 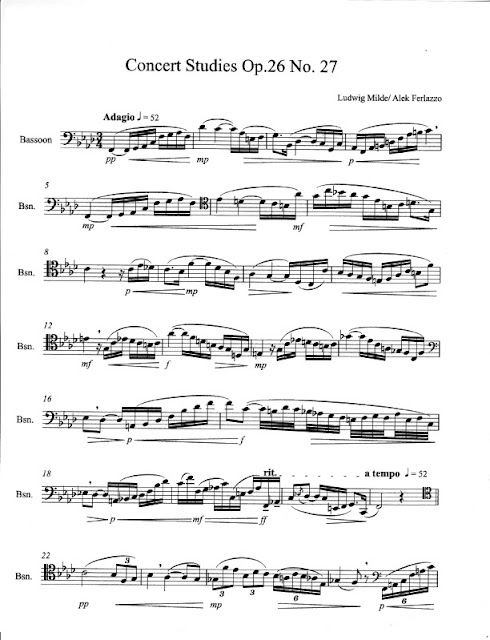 Here is the first page of the Merseburger Edition which dates from between the World Wars. 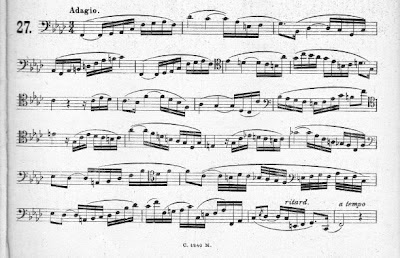 In the Merseberg, there are NO dynamics on the page!  This leaves a lot of leeway to the performer.  With leeway comes responsibility.  That means applying your own musical logic and instincts to the piece along with your understanding of acceptable performance practice, even music theory.

In the IMSLP edition, many of these questions have been solved for us already by the arranger, Alek Ferlazzo.  However, unless we see what Alek was working with, we don't know which decisions are his and which were made by Milde. This is important to know.

A side note:  Google tells me that Alek may be a high school  bassoonist(?)  He obviously has great skill with Sibelius.  I want to commend him for his work and generosity in sharing his editions and uploads.

A similar situation applies in Simon Kovar's edition (International Music Company) of the Milde Concert Studies.  Kovar made many fine suggestions, but took a lot of liberties with his editing when compared to an older edition like Merseburger, Hofmeister or Cundy-Bettoney (which are basically the same).  The trouble is, once again, without access to these editions, we don't know what is the editor and what is Milde.

When I teach the Mozart I require my students to purchase the Universal Edition.  For Milde it's Cundy-Bettoney or Hofmeister.

That's enough ranting for one post.  Soon I'll devote some time to discussing the virtues and pitfalls of YouTube and Naxos.
Posted by Barry Stees at 9:13 AM